...More than 10 children with severe burn injuries admitted at the hospital amidst the pandemic, says doctors at Columbia Asia Hospital, Whitefield 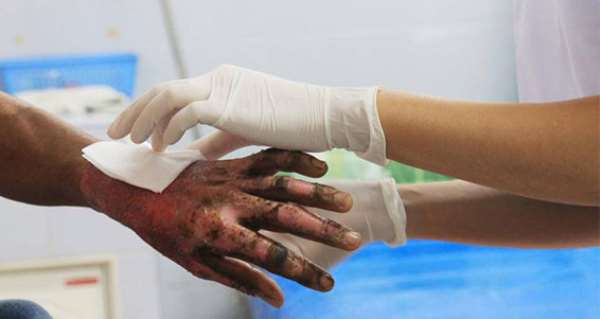 Ever since the advent of the pandemic, steam inhalation was considered by many as a prophylactic measure to prevent coronavirus infection. Traditionally in India, this has been practiced for common flu and nasal congestion. Steam inhalation is considered effective for a host of respiratory issues. However, it would not be prudent to use this method in children without adequate adult supervision.

7-year-old Aditya Murali (name changed) was unable to sleep properly that night due to a cold and stuffed nose. He woke his mother and she gave him a steam inhaler with hot water to take steam so to ease the difficulty. Half asleep Aditya accidently spilt the hot water on himself. He sustained severe burns and was rushed to the Columbia Asia Hospital, Whitefield, a unit of Manipal Hospitals. Post examination at the emergency, he was diagnosed of second degree scald burns involving both thighs, genital area, abdomen and hands. He was admitted to the hospital and had to undergo multiple procedures like collagen application and surgeries in form of split skin grafting and debridement.

Dr. Kartik Tallam, Consultant Plastic Surgeon, Columbia Asia hospital, Whitefield, a unit of Manipal Hospitals who treated the child said, “Aditya was brought to hospital with over 30% burns. His had second-degree burns and they were more severe because the damage extends beyond the top layer of skin. Superficial scald burns can be treated by collagen application and deep burns will require skin grafting. Pediatric burn treatment involves long duration of admission and is very traumatic physically and psychologically to the child as well as the family. The subject needs urgent awareness as we see a rise in burn injuries from steam machine. Adult supervision is a must during steam inhalation in children to avoid such mishaps.”

He added that there are long term sequalae of burns like contractures which require further surgeries, including contracture release and deformity correction. He also said psychological problems like post-traumatic stress disorder, pain disorders and fear for hospitals are also be seen in children on follow up.

Dr. S.P.Senthil Kumar, Consultant Pediatric & Neonatal Intensivist, Columbia Asia hospital, Whitefield, a unit of Manipal Hospitals said, “Children's intuitiveness, limited motor skills and unawareness of danger put them at increased risk of burn injuries. We have treated more than 10 children with significant burn injuries due to steam inhalation since last year. Though steam inhalation may help in some symptomatic relief in nasal congestion, there is no scientific evidence to prove that it will decrease the COVID-19 viral replication. He added that apart from burn injuries, steam inhalation with eucalyptus oil, camphor or any essential oil may even lead to seizures and encephalopathy in children.”