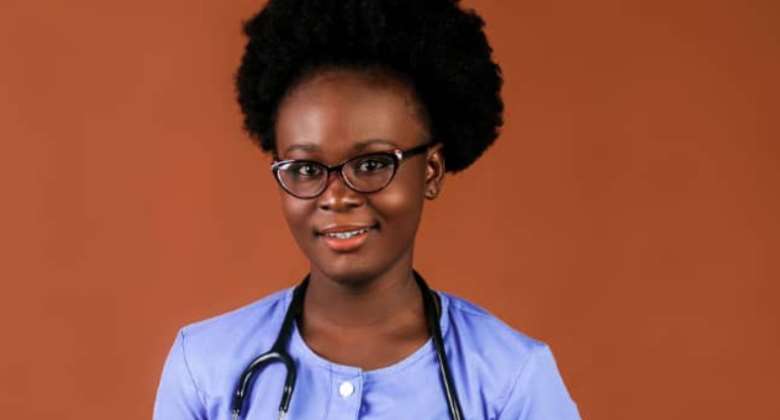 For theatre lovers who have watched Scribe Productions’ musical stage play, The Boy Called A Girl , one character that stands out is Adez. She does a lot with her role. All through the stage play, she stands for what is right and tries to defend it with the last drop of her blood.

Adez was played by Bernice Codjoe, a nursing officer with the Intensive Care Unit of Korle bu Teaching Hospital, Ghana. Her flawless role in the musical earned her so many accolades in 2019.

The talented actress has recently thrown some spotlight on her career in nursing, music and theater. Speaking to Scribe News, Bernice Codjoe described herself as “a devoted, self-

motivated young lady who seeks to touch as many lives with her giftings while on earth.” She is the first of five children born to Mr. and Mrs. Codjoe. Her siblings that come after her are fraternal twins and two others are after them.

“I had my basic education in Sunyani, second cycle education in Kumasi Wesley Girls High School where I studied Science and then furthered to Central University to pursue my first degree program in nursing,” the Psalm 91 (Hiding Place) singer explained.

Talking about how her music career started, the gospel diva narrated, “I started singing at a very young age. I will definitely not miss the chance of following my mum to her choir rehearsals and to her shock, I will get home and start singing all the songs back to her. I was chosen to sing at church events, school gatherings and ceremonies.”

Bernice Codjoe has been singing professionally for close to a decade. She has backed anointed ministers on great platforms alongside her solo projects. Today, she can boast of three original singles she wrote by herself ― Glory to the lamb, Psalm 91 (Hiding Place) and Sweetest friend. They can be found on all digital stores.

“Music has been an integral part of my life but from the day I took the courage to record my spiritual song covers, Chants stands out for me. Their impact and how much of a blessing they were to people even outside the borders of Ghana encouraged me so much.”

Juggling music, theater and nursing hasn’t been an easy one for Bernice Codjoe. All fields deserve an equal measure of attention and commitment. She, however, insists that the beauty of life does not depend on how happy she is but how happy others are because of her.

“Seeing families wipe off their tears and reunite and availing myself to do things my patients would have done themselves if they were not sick is a bundle of joy and sense of fulfillment to me.”

As a full-time career, Bernice Codjoe chose nursing because of a past experience and for the fact that she naturally would want to go to every extent to ensure the well-being of others. Her

happiest moment as a nurse has been the day a comatose child on mechanical ventilatory support (life support), whose chances of survival were very minimal, gained full recovery. She recalls her saddest moment as the demise of a patient she got so attached and connected to.

The actress, singer and nurse who looks up to legends like Jackie Appiah and Efe Grace noted that the future looks great for her. She foresees a future where she will use her gifts maximally to the benefit of all, wherever she finds herself. She perceives herself as a pencil in the hands of her creator.

"My experiences, especially in the healthcare sector, have proven to me time and time again how worthless we are once we breathe our last. Today, we are here and hailed. Tomorrow, we're no more. For me, as long as I have breath, the wisest thing to do is to avail myself to doing anything for the kingdom of God's sake. That is everlasting. It has eternal rewards.”

Scribe Productions is a Ghanaian stage production house noted for musicals such as The Boy Called A Girl, My Wife-in-law and I Want To Sue God among others.