Kanye West's sneakers goes for $1million, the most expensive in the world 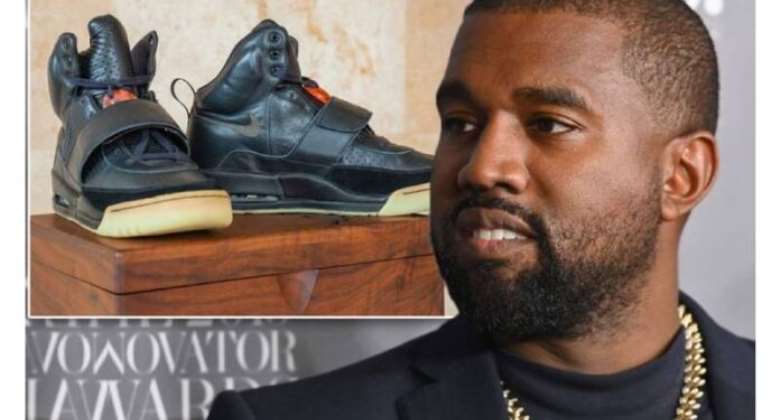 Kanye West could be on his way to breaking the record for the world’s most expensive trainers when his first pair of own-brand sneakers go under the hammer at an auction.

The 43-year-old rapper has become a billionaire through his Yeezy footwear and clothing range and it would seem that his first-ever trainers are going to sell for more than $1 million (GH₵5,785,000.00 )

The Yeezy size-12s was Kanye’s prototype and London auction house Sotheby’s are hoping that it will break the record for the most expensive ever.

While Kanye’s name will help sell the Yeezy original, the rapper who is going through a divorce from Kim Kardashian won’t be adding any money to his coffers to battle his estranged wife as the trainers are being sold by avid collector Ryan Chang.

Kanye’s footwear empire is valued at £3.4 billion and the Nike Air Yeezy 1, was the first in a short-lived collaboration with Nike.

The rapper wore a sample of these Nike-made shoes during the 50th Grammy Awards in 2008, at which he performed ‘Hey Mama’ and ‘Stronger.’

As fans tried to find out what trainers he was wearing, Kanye had to return them to Nike’s “Innovation Kitchen” lab in Oregon as his Yeezy footwear line was being kept top secret.

The following year, the Nike Yeezy 1, was launched but by 2013, Kanye was leaving them to forge a partnership with Adidas, with who he still works with today.

Describing the trainers, Sotheby’s wrote: “The Nike Air Yeezy I and Air Yeezy II are still some of the most coveted sneakers by collectors”.

Brahm Wachter, the auction house’s Head of Streetwear & Modern Collectables said: “Debuted on-stage at the Grammys in 2008, the sneakers set off waves in the sneaker community as people tried to identify the mysterious pair.

“Afterwards, we saw a series of collaborations between Kanye and Nike, and then later the birth of his line with Adidas.”

They were originally sold as “Grammy Worn” in benefit of Doernbecher Children’s Hospital, a charity Nike frequently supports.

The trainers are on view at the Hong Kong Convention and Exhibition Centre from April 16 to April 21 and whoever snaps up the footwear for an expected cool million will be kept private unless they choose to have their identity revealed.

Yeezy is a shortening of the “Kanyeezy” nickname Jay-Z gave Kanye in the intro to his song Lucifer on 2003‘s The Black Album.

Latest Photo Reports
Catch up with all the political quotes from our politicians.
Advertise here
More Lifestyle
ModernGhana Links
School Reopening – What Can We Expect?
Meet Michael and Abena Richardson of ‘Destination Africa’ via Ghana
October Is Breast Cancer Awareness Month
Taking up Exercise or Sports Immediately after Covid Recovery can be Dangerous for Health
Post-Covid fatigue - Simple ways to deal with it
What is life?
Overhydration – What are the risks and why you must avoid it?
Check your oximeter’s fitness
Healthy eating - Food to eat during Covid-19 times
TOP STORIES