By Edward A. Ken-Zorre
Women Health 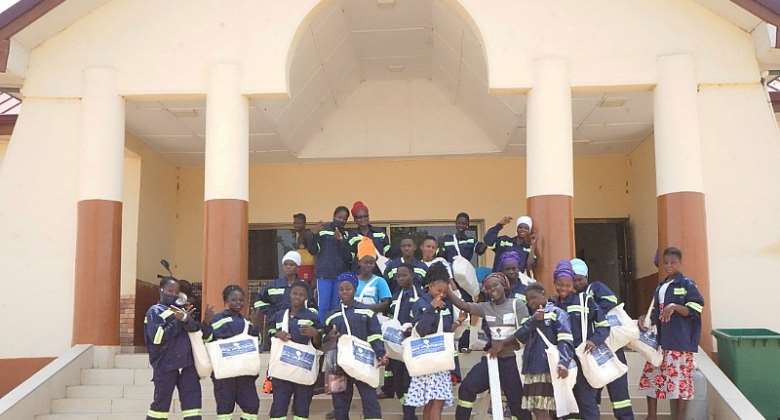 Girls’ Life Choices, a child protection and skills development project implemented by Savana Signatures with support from United Nations International Children's Emergency Fund (UNICEF) and Korea International Cooperation Agency (KOICA) under the Better Life for Girls programme in the Northern Region, has empowered 500 adolescent girls to be assertive and self-reliance.

Felicia Fokor, a 19-year-old girl in the Bole District of the Savanna Region enrolled in tile laying apprenticeship through the project to undergo training for a period of 6 months.

As part of the project requirements, she was given all the required basic tools not only to start and finish her training, but also to start her own business after she completes her training.

"Tile laying is lucrative in Bole. Everybody in the District is tiling one thing or the other. This is an opportunity for me to earn money and take care of my daughter, she is my motivation and I do not want her to end up a teenage mother like me," she said.

Libangna Faustina, a beneficiary in the Tatale-Sunguli District in the Northern Region said the initiative taught her how to protect herself from SGBV, teenage pregnancy and how to manage her menstrual cycle.

She added that, the knowledge coupled with the economic empowerment she is receiving ignites her desire to be a protector of girls’ rights in her community.

Speaking at a tools distribution ceremony, the Kpandai District Assembly Assistant Director eulogizes Savana Signatures and its partners for such a laudable initiative in the Kpandai district.

“The initiative came at the right time when the district was scouting for ways of empowering the increasing number of girls who have dropped out of school due to financial constraints and unplanned pregnancies,” Mr Abdulai stated.

Mr. Abdulai added that the project's focus on sexual and reproductive health and rights (SRHR), skills and economic empowerment has reduced girl-child vulnerabilities and is contributing to preventing teenage pregnancies and child marriages within the district.

He urged the girls to put the tools given to them to good use so as to position themselves as pacesetters to the empowerment of women and girls in the district.

As part of the Girls’ Life Choices project packages, tools distribution ceremonies were organized in 16 districts to hand over equipment and assorted tools to the 500 beneficiaries between the ages of 15 – 19 years who were enrolled in non-traditionally male-dominated professions; carpentry, masonry, tiling, glazing and fabrication, welding etc.

The equipment and assorted tools are given to them to complement their training and serve as start-up equipment after completion.

Story by: Edward A. Ken-Zorre.

Hottest Photo Reports
Catch up with all the political quotes from our politicians.
Advertise here
More Women Health
ModernGhana Links
Celebrating the Women in Your Life 2022
A WOMAN OF VIRTUE - Adjei Boakye eulogises Grandmother
Supporting a woman through her mental health post-pregnancy is important for new mothers
Cervical cancer, how do we prevent it?
Breast Conservation Surgery -The new paradigm
Breast Cancer: symptoms, prevention, and treatment
4 life lessons in the labor ward
Is it normal to have blood clots during menstruation?
Pregnancy and Hypertension: Keep these facts in mind
TOP STORIES