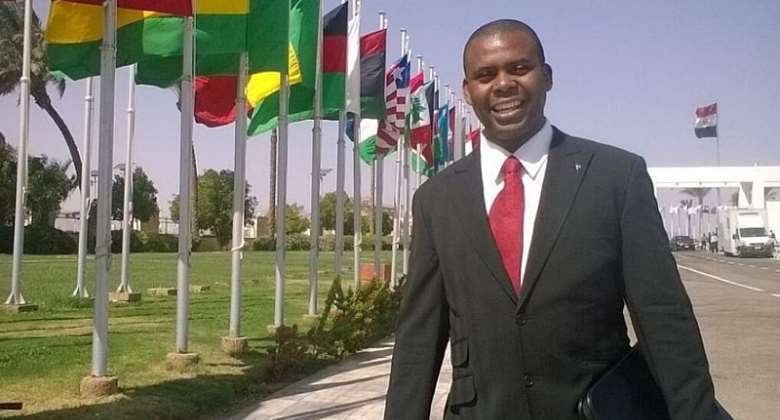 Emmanuel during the Plenary of the Pan African Parliament in Sharm el Sheikh, Egypt / file

Project overview — PAN-African Memorial, also known as the Black Memorial, is an international memorial dedicated to the legacy of enslaved Africans, African-Americans and people of African origin around the world, terrorized and humiliated by colonialism and white supremacy.

Background Work on the memorial began on January 11, 2018 after President Donald Trump unleashed a vile word in reference to Africa that Americans aren’t accustomed to hearing from their president. “Shithole” entered the presidential lexicon, snatched the headlines, and sparked international outrage.

While much of the world was focused on rebuking the U.S President and insisting African countries are not “shithole,” African enthusiast and award winning refugee rights campaigner, Emmanuel Neba Fuh argued that though it is easy to place the triumph of racism on Donald Trump‟s shoulders, he is just a manifestation of the ugliness of white supremacy. Emmanuel began investigating the racial hierarchy white-supremacists-colonial-masters constructed with the loathsome word five centuries back that is still alive.

He was interested not only in how the word built a mysterious allure in an effort to paint Africa as a savage, untamed land for looting, dishonest acquisition of property and great human hunting, but in understanding how millions of black folks were massacred simply because they showed dignity, humanity, and just wanted to be respected as human beings.

Racial terror by means of the Trans-Atlantic slave trade, Belgian genocide in the Congo, German genocide in Namibia, French genocide in Madagascar, Algeria, and Cameroun; British Ethnic Cleansing in Kenya and Apartheid in South Africa, Portuguese massacres in Guinea-Bissau, Angola and Mozambique, the various wars of independence, racial segregation and Jim Crow in the U.S. (not exclusively), were especially effective because it allowed the entire black race to acknowledge their inferiority status, and know the consequence of not submitting to the white man.

It was intended to send a message that if Africans, African-Americans and people of African origin around the world try to resist slavery, if they try to prevent the partition of their villages, if they insist on gaining independence, if they try to gain the right to vote, if they do anything that complicates white supremacy, white dominance and political power, they will be killed.

Intended to acknowledge centuries of racial terrorism, the research ultimately produced “Triumph of Racism: The History of White Supremacy in Africa” an 800 page legendary classic book that is soon to be released. Beautifully written and expertly argued, the landmark in African studies documented racial terror genocides, massacres, and high profile assassinations (not exclusively) across the African continent, many of which had never been documented.

Cognizance of the fact that there is currently no memorial dedicated to the legacy of enslaved Africans, African-Americans and people of African origin in their ancestral homeland – Africa, Pan-African Memorial was conceived with the hope of creating a sober, meaningful site where people can gather and reflect on Africa‟s history of racial inequality, commemorate the victims and advocate for social justice.

The memorial which is planned to set on a twenty five-acre site in Ghana will have a library dedicated to the history of Africa and the life stories and experiences of some of Africa‟s greatest sons and daughters.

The memorial will provide a sacred space (a Chapel and a Mosque) for visitors to pray and reflect about racial terrorism and its legacy.

In an effort to reshape the cultural landscape with monuments and memorials that more truthfully and accurately reflect the African history, the site will host a mega-memorial pool with a huge slave ship onboard to symbolize millions of African men and women that were transported to the Americas.

Artists will use sculpture, art, and design to capture African men and women at the bottom of the Atlantic Ocean who were reportedly thrown overboard by European slave traders either because they were unruly or sick.

Overlooking the memorial pool at the center of the site will be a memorial structure in the shape of the African map. These fifty four space-structures will showcase genocides, Apartheid and massacres, detailing the various countries where the terrorism took place.

The memorial will have a special site for countless Africans, African-Americans and people of African origin around the world who amid mortar burst, whining bullets and the pain of racism, died fighting for European colonial masters in the First and Second World Wars.

For the unsung pro-independence revolutionary heroes of Africa – Patrice Lumumba, Steve Biko, Thomas Sankara, Felix-Roland Moumie, Barthélemy Boganda, Mehdi Ben Barka, Eduardo Chivambo Mondlane, Amilcar Costa Cabral, Ruben Um Nyobe, and many others who stood up against European colonialism and were demonized as terrorist and brutally assassinated, soil will be collected in big bottles from either where they were born or buried, and transported to PAM, and public markers erected in their honor.

In honor of African-American leaders who sacrificed their lives for the black cause in the United States of America, and other parts of the world, including Harriet Tubman, Alexander Augusta, Abraham Galloway, Frederick Douglass, Martin Luther King Jr, and Malcolm X (not exclusively), soil will also be collected in bottles from where they were buried and transported to PAM. Key information about these leaders will be saved in the library and documented for future generations. Public Markers will also be erected in their honor.

The memorial will also have a remembrance wall with the names of selfless folks who shown exemplary leadership, and gone beyond their means to promote the black race.

In solidarity with African migrants who have died in the Mediterranean Sea, the jungles of Latin America, and other routes to Europe and America, in an attempt to escape a far-reaching network of state sponsored terrorism, endless civil wars, and extreme poverty/hardship, monuments will also be constructed in the honor.

Research suggests that while racism had a psychological, multigenerational impact on the era of slave owners, its imprint and the trauma it left – which was maintained by pathological stereotypes and misinformation about black people – became transferrable to subsequent generations including those who never own slaves.

Built into power structures and institutions especially in America‟s Deep South, where white people were taught to propagate racism and not to see it, white supremacy became a reaction to the feeling of white people‟s social status threatened by the advancement of black folks.

The disturbing reality is that racism did real psychic damage not only to black people, but to white people too. In the circumstance of Mr Trump ‟shithole‟ remarks, it can be argued that the legacy that it created is the pattern of racial inequality and inferior status meted out on Africa and the usage of such profane language (shithole) on folks of color. Publicly confronting the truth about history is the first step towards recovery and reconciliation. A history of racial injustice must be acknowledged and mass atrocities and abuse must be recognized and remembered, before a society can recover from hate. Public commemoration plays a significant role in prompting community-wide reconciliation.

Modeled on important projects used to overcome difficult histories of genocide, apartheid, and horrific human rights abuses in other countries, PAM provides a sacred space for truth-telling and reflection about racial terrorism and its legacy in Africa and around the world.

PAM has been designed to promote a more hopeful commitment to racial equality and just treatment of all people. The opening of PAM will be accompanied by several days of educational panels and presentations from leading international figures, performances and concerts from acclaimed artists, and a large opening ceremony to celebrate the launch of this important new African institution.

Besides the fact that Ghana was one of several West African territories at the heart of the Trans-Atlantic Trade, with a long history racial terror, the country was chosen home to PAM in honor of Kwame Nkrumah, its first Prime Minister and President. A founding member of the Organization of African Unity, Kwame Nkrumah was an influential advocate of Pan-Africanism, and a courageous revolutionary hero who played a pivotal role in the independence of several African countries. Nkrumah also worked closely with many African-American Civil Rights leaders.

The name of the pre-independence colony Gold Coast was changed at independence to Ghana by Premier Nkrumah in honor of the once celebrated Ghana Kingdom in West Africa.

PAM library will liaise with major universities around the world to assist students with historical truth-telling about the black race. It will also host community events with internationally-acclaimed artists, writers, and scholars, films, and other programming to address a range of topics and issues relating to its work.

Akufo-Addo directs CJ to look into petition for Jean Mensa’s...
25 minutes ago