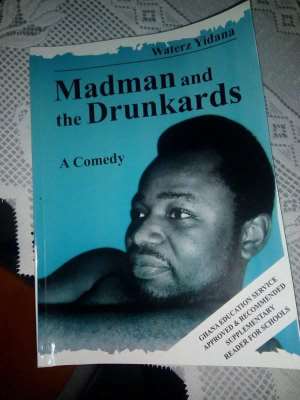 Waterz Yidana is a respected Ghanaian writer. He became known in Ghana when he won the prestigious 40Under40 Awards in Authorship and Creative Writings in 2019, awarded by Xodus Communications. He has been nominated for several awards in Ghana and he won some of them. His first play "The Mango Seed" won the Efo Kodjo Mawugbe's Prize in Drama in 2019, awarded by the Ghana Association of Writers (GAW).

His second play "Madman and the Drunkards" which has been adopted by the University of Ghana for postgraduate studies also won the Efo Kodjo Mawugbe's Prize in Drama in 2017, awarded by the Ghana Association of Writers (GAW). The book is in the libraries of Ivy League universities abroad such as: Harvard, Oxford, Stanford, Princeton and many others. The Ghana Education Service (GES) also approved and recommended it for Senior High Schools in Ghana.

In fact, "Madman and the Drunkards" is said to be the next "Things Fall Apart" in Africa. It is 'highly likely' to be on the next list of books the West African Examination Council (WAEC) would consider for Core Literature in English for Senior High Schools in West Africa. The book has been positively reviewed by prominent writers and English Professors in both Ghana and abroad and many people have accepted that it is one of the greatest plays written by a Ghanaian. The play has generated some good income for the multiple award winning writer...

The writer was recently nominated for the "Discovery of The Year Award" by the Ghana Arts and Culture Awards. He has earned several award nominations and has won a good number of them...

Waterz Yidana was born by a Ghanaian father with a Togolese mother. His mother hails from a town called Voga, a suburb of Lome, in Togo. He was partly raised and educated in Lagos-- Nigeria. He dedicated his award-winning book "Madman and the Drunkards" to Mankudivi his son because the book was published the same year the boy was born.

He is a columnist with GhanaWeb and ModernGhana. He writes for The Mirror, Junior Graphic and other magazines on the African continent. He is also an activist and a social media commentator, especially, Facebook where he puts a lot of his quotations, on daily basis. He is also the CEO and Founder of Makola Books Limited. He has just finished writing two new books: the first one is titled, "Thomas Sankara's Ghost" and the second one is also titled, "The Land of God". Both books are plays and will very soon be in the market for Ghanaian students and the general public to purchase.

The award-winning writer has also had some media exposure. He has been interviewed on both TV and radio to talk about his books and activism. He was on GBC TV, JoyNews TV, Citi FM, Radio XYZ and a few others. He is one of the biggest things yet to happen to Ghana as his role models are all extremely successful human beings...