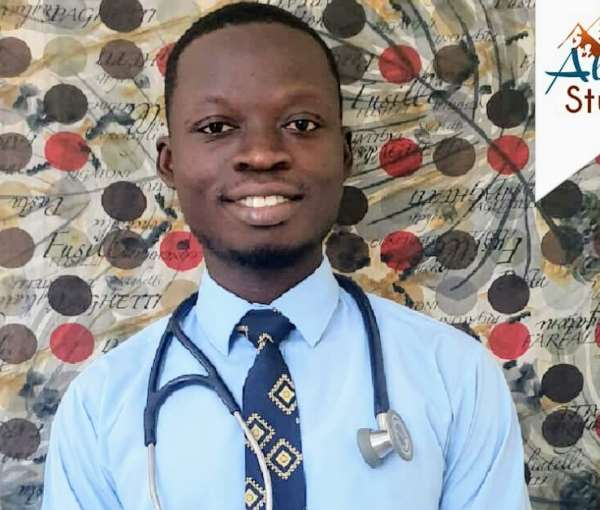 Senior Dr. Douglas Antwi was born in Chine, a community in the Bibiani Anhwiaso, Bekwai District, and come from Edwinase- Kokofu. He grew up in Sefwi- Surano, a village in the mining area of the Bibiani Anhwiaso, Bekwai District, where he had his primary school education at Sefwi Surano 'A' Anglican Primary. Snr. Dr. Douglas Antwi is the seventh of tenth children of his parent. His Dad passed away when he was in JHS 2. His Grandpa visited them at the village and upon seeing his school terminal reports suggested that, Snr Dr. Antwi should be moved to Kumasi to further his studies. He then moved to Kumasi after his primary school to stay with his elder sister – Mercy and till date, stays with her.

Upon arriving in Kumasi, he stayed home for two terms and continued JHS 1 at Ohwimase M/A Basic 'B' in the year 2004 and 2005. Snr. Dr. Antwi again changed school to Forces Basic School where he had to repeat the year, not because he failed the entrance examination due to the school rules of not admitting students in the second year and continued through to JHS 3 (2005-2008), where he came out with flying colors (‘9’ Ones and 2 in French).

During the selection of senior high schools, he told his teachers to select General Science at Prempeh College. His teachers advised him to choose Visual Arts since, that would be easy for him to be admitted to the college. He gained admission to Prempeh College in the year 2008. He studied hard and had an excellent terminal result and was privileged to have a change of Programme to General Science in the 2nd year by the senior house master by name Mr. Atiamo A.K.A “Internet Man” and eventually ended up as one of the Maths and Science quiz boys known as “Brilla Boys” meaning brilliant boys. He wrote the Nov/Dec examination in form 3 (2011) and had 7As, and 1 B2 (Physics) and completed finally in 2012 WASSCE with 8As by God's grace.

Snr. Dr Douglas Antwi applied for admission to the medical school in the same year (2012) at KNUST, where he was called for an entrance examination and an interview, at the end of which, He given placement in pharmacy, which happened to be his 2nd choice programme.

He was initially unwilling to go, but was encouraged by his family to do so. With the hope of getting a change of Programme at the end of the first year, he performed very well with a CGPA of 69.5% , of which only seven pharmacy students had 70%.

At the end year, He was told by KNUST officers after several attempts for a change of programme that getting the change was not going to be possible, because two final year SHS groups were completing (2013/2014). Snr. Dr. Douglas Antwi went ahead and bought new forms altogether for KNUST, UG and as well as UDS (2013). He was called for an entrance examination and an interview at KNUST, and UG, Legon,. But unfortunately, he was again turned down at the end of the interview; even after successfully going through with the examinations.

University of Ghana on the other hand, included his name among the list of 150 students who passed the examination. And after the interview, his name was taken from the list.

Thankfully, he finally gained admission to study his dream programme at UDS, Tamale campus in 2013. And surprisingly, even without an interview, his good grades spoke for him. He was finally getting closer to achieving his dream of becoming a medical doctor. And by God's grace, he is officially Senior Dr. Douglas Antwi at the end of his 7-yr journey (2013-2020).

Snr. Dr. Douglas Antwi knew he wanted to be a Medical Doctor from way back in Primary school. Back then, his dad had chronic conditions: Diabetes and Hypertension, and would always encourage him to study hard to come out and take care of him. He would say, “I don't mind selling my cocoa farm, if I have to, to push you further through education”. The Grandpa too kept re-echoing the fact that he believed in him and kept supporting him. Snr. Dr. Antwi Douglas kept on thanking God for his Sister, Mercy, who sacrificed so much to make his dream a reality. The family didn't have much, but offered they had to bring him this far.

His secret to success is a scripture from Proverbs 22:29, “Do you see a man diligent at what he does. He will not stand before ordinary men. Rather, he will stand among princes”.

Snr. Dr Antwi Douglas also learns from everyone and every circumstance: “There's always something to be learned.” He says. And the other thing about him is that, he doesn’t mind being different or doing things differently; provided he knows it's the right thing. And regardless of what others ​do or say. He is a determined person and does not give up easily (An admirable quality about him).

“My current state is just the foundation for the great gifts God has entrusted me with. There are doctors, and there are good doctors. I will continue to work hard, learn more and remain humble and become that doctor whom the patients​ specifically request to see”. - Snr. Dr. Antwi Douglas

Snr. Dr Antwi Douglas has an advice to friends and youth out there, “I want you to know that you are not ordinary. God has put a special gift in each of us. Believe in your capability, work hard at it and keep trusting in God. Remember, that you won't always have things working out the way you expect them, but in all, don't give up, since God is working in the background to bring you to an expected end”.

In short, try once, and if it works, keep it up. And If it doesn't, keep trying.