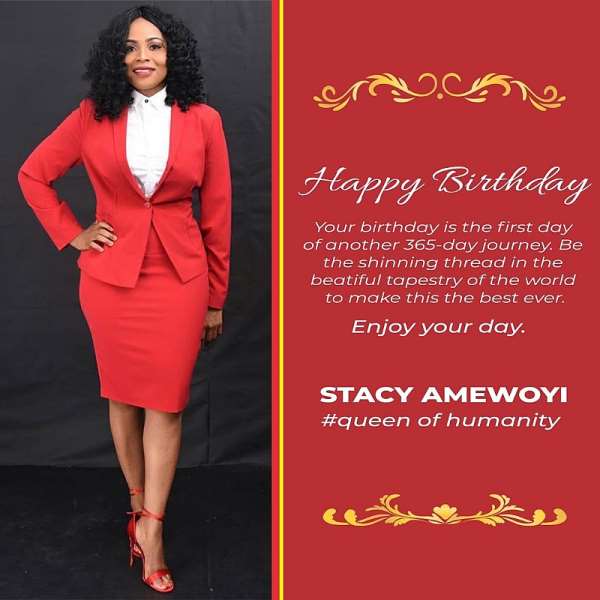 You may have heard or seen her smiley face over the screens and social media, but the real person is yet to be revealed. From the lyrics of Stonebwoy’s song, which says, you only know my name, but you don’t know my story is the exact of Stacy.

At a tender age of seventeen, she realized her mission and purpose on earth. It was to love and give back to society even when she didn’t receive that as an orphan. She did few donations around some homes and decided to build shelters for the homeless.

Her first attempt to build a shelter, a school, and rescue place around Nyamekye was squashed by part of her friends and family and the shattered system in Ghana. Their actions of she being a youngster crippled her completion of the building.

She further moved to complete shelter at Bubuashie, for a salon and a place to learn a vocation, which was successful in helping the community; (kindly check on youtube to find out more about Stacy foundation).

Her great-grandmother was marveled at the vision and passion she had for what she wanted to do after returning from Japan. Although happy at the attempt, she disclosed to her how she equally helped others from the village but encountered so many disappointments from these youngsters that she gave up.

She was, however, happy and astonished at the same time that, Stacy had taken on the mantle to carry on what she put on hold. Stacy was blessed through a word of prayer and was given the green light to go ahead with what she wanted to do.

Her great grandmother continued with a family emergency meeting including her uncles, elder brothers, and the chief of their village. It was disclosed to them that; she has blessed as their youngster to receive their great grandmother’s land for what she had in mind.

The family, therefore, were witnesses to the transfer of land to her for the continuation of the family’s passion in helping others. It was, therefore, never to be heard that anyone has risen against her even after her great grandmother’s death.

Following suit after the meeting, she met with the same uncles and work begun on the land. Few months into the project, her great grandmother suddenly took ill and unfortunately died.

With the agreement being verbal, with nothing written or recorded, the witnessing uncles at the family emergency meeting, took a new turn and with all determination, they robbed her of the property.

Their mindset was that, a youngster like her in the family couldn’t get to that level as they followed up with threats which really gave her a good scare and gave up the land for good.

Though things were rough, she still had the opportunity to go to Dubai. Over there, she toiled to bring home much, which she did. Helping others has always been her heart desire as she realized she couldn’t do nothing else better.

Even with what was done to her by her uncles, she never veered off the vision but still pursued even after coming back from Dubai. She met with people who knew of lands for sale and had negotiations with them.

From Kasoa through Amasaman to Kotoku, she was dwindled and defrauded of her money and lands. Even documented evidence approved by the lands commission was false. It was said that, the land mediators connived with people at the lands commission to go about this fraud business.

A single land could be sold to thousands of people and upon reaching these lands, one could find carcasses of fowls which had been used through spiritual means to secure the land from another buyer.

As young as she was, with a lot of expectations and a bright future, she didn’t want to get involved with these scandals. Thus she had to let go of over six lands without asking for the monies which never returned after its being paid.

The severity of her downfalls in life begun with these lands as she spent huge sums of monies on absolutely nothing. According to her, no matter what you do on the issue of land in Ghana, there is one way or the other, a manipulator somewhere who will spend a huge sum of your money.

Stacy was pretty much devastated, heartbroken and disturbed looking at how, her fellow man could divert this well purposed vision of hers. Out of this frustration, she decided to renovate the building at Bubiashie into a storey building.

This was to enable more people have shelter and learn a vocation. A vocation in cosmetology and other fields the helpless needed to learn. She could go by cosmetology because she studied at Second Image and had done more short courses into that field both here and abroad.

Stacy has all her life being about humanity as after diploma, she is studying humanity as a course at a university in the US. Currently, her Bubuashie shelter is closed down due to family involvement which created chaos among the workers and students by then.

With that notwithstanding, she has begun regional tours in selecting people for training and grooming. Finding out her purpose in life very early, has strengthened her and nothing could deter her from reaching or attaining the highest height.

As we speak, Stacy, not for COVID-19, come to Ghana every three months from the US to check on her foundation and her students. Even in her absence, she made provisions for her reps in Ghana, to make donations of toiletries and PPEs to the vulnerable on the streets.

She continues with some donations in some homes and rural areas and when she’s leaving, she makes sure her students are well taken care of by some selected people.

With no support from nowhere as they claim the vision is hers alone, she has strived with the help of few people to be able to lend a hand to the less privileged in society.

Even though she has been duped by many coming in as helpers, she has never lost focus. Aside the vocational training and providing shelter, she takes her students through health screening and today, those who humbly went through this training have made it and generating money on their own.

Thankfully, with the help of a loan, she has been able to acquire a land around Kasoa where she will finally put up her long heart felt desires. A school, a place of rescue and shelter for homeless kids, and the less privileged.

As a birthday wish, it’s her prayer that this time around, the land and those who will come on board as the day go by, will be able to accomplish all that she dreams of.

She, therefore, calls on all and sundry who has same heart as hers, from Ghana and beyond, institutions and churches to come join hands with her in getting this done.

Stacy inquires of new friends and families, with this calling upon their hearts, to come on board. She explained that this calling, without the heart involved and a bit of understanding into it, could easily be messed up.

As others come to help, they turn around to exploit her hard-earned money and others use her name for wrong purposes. Therefore, she is just hoping and pleading that people that come across this time, come with a good heart to turn things around for the better.

“From the age of seventeen, I have raised all the funds, without sending applications anywhere for support. It has always been from the paycheck of my businesses. It’s a thing instilled in my heart, and for twenty-one years into this, I have closed over six shops due to wicked friends and family, but that wouldn’t deter me from continuing with this. I will equally be glad if you don’t want to come on board but you have uncompleted buildings around and in the regions of Ghana, or even ideas to help push this agenda, my hands are wide opened for all of you. I need all the prayers and support to get this mission to come to pass”. Stacy concluded.

High Court shoot down Agordzo's application to travel
22 minutes ago

ASEPA to file RTI request for minutes of Justice Dotse-AG 'S...
22 minutes ago