HRM King Adamtey I: The Academician bent on leading Africa into Modern unity 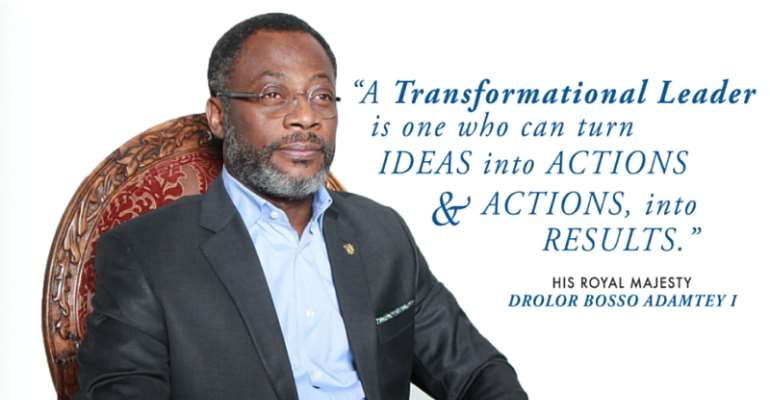 Given the customs in which royalty is steeped in Africa, it is very rare to find an African King that also allows their faith and modernity to fully accompany their traditional kingship status. And yet that is what defines His Royal Majesty King Adamtey I.

As though this combo was not intriguing enough, HRM King Adamtey has three doctorates and is the first chancellor of the University of Professional Studies Accra (UPSA) in Ghana.

On August 10, 1999, he was coronated in the Se (Shai) State. That same year, he was appointed the Special Advisor to the Assistant Secretary-General and Director of the United Nations Development Program (UNDP).

“I’ve always been passionate about Africa and the power of her people to provide leadership to the world in the areas of global understanding, unity and prosperity, but we first must unite the continent by embracing our differences as our strength,” the King told TheAfricanDream.net in a chat.

The visionary unifier of his people in contemporary times

Drolor Bosso Adamtey’s ultimate vision is to unify the Se (Shai) People, both home and those in the Diaspora, and to provide the kind of leadership that promotes peace, progress and sustainable development.

One of the many ways in which he empowers the younger generation is through the Drolor Centre for Strategic Leadership – a Centre of Excellence which aims to explore leadership in a globally modernized context.

Born to lead, yet humble enough to let God direct

HRM King Adamtey is a thought leader, social scientist, life therapist, global advisor, humanitarian, and educator. He genuinely cares for people, is able to bring together diverse groups, and moreover, is skilled in helping resolve conflicts. He is a wise King, very intellectual and his messages are profound. Yet, when he speaks even a child can understand.

When spending time with His Royal Majesty, you will quickly detect that he is one of a kind, a natural born leader, yet very humble and depends solely upon God’s direction.

Despite his many accolades, the King tells TheAfricanDream.net that “I still believe I am merely a servant of God. A servant who has been called in these times to lead God’s people as they traverse modern times hardships to arrive at the true place of light. A place where humanity sees itself as one people working together in peace and progress, because diversity works best with inclusion and equity irrespective of race and gender.”

It is also worth mentioning that His Royal Majesty Drolor Bosso Adamtey is the best-selling author of insightful books like When Kings Pray and Fast, Prayer and Fasting, I Have Seen the Kingdom, A Place Called There, The Power and Influence of A Woman, and Who Says You Can’t.