Bullying: One Of The Leading Causes Of Mental Health Problems Amongst Children 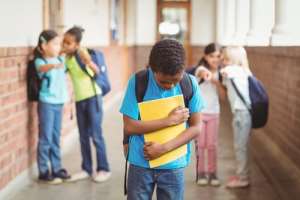 Many health professionals define bullying as the unwanted physical or verbal aggression directed at a specific person, repeated over a period, involves an imbalance of power and acts to exclude the victim from a group, MedicalNet.com. Contrary to popular belief that bullying only takes place between children at school, it also occurs amongst adults at workplaces.

About one out of every five students experiences some form of bullying in school (pacer.org) and about 8 out 10 adults are being bullied in their workplace, usatoday.com. Bullying turns out to be more of an occurrence than we might have perceived.

Disheartening as it sounds, bullying has adverse effects on the victims: it leads to physical or emotional problems, sleep problems, a decline in academic performance, and impairs relationships. Victims of bullying also tend to develop severe anxiety. Bullies and victims also tend to experience depression more than their peers who have not been involved in bullying, verywellfamily.com.

Oftentimes, parents are not unaware that their wards are being bullied in school since many victims of bullying prefer not to talk about it. Many parents discern these problems after the behaviors of their victimized children change: the victims feel depressed, reserved from society, and usually resort to crying hysterically. Most studies have shown that children and youth who are victims of bullying are more likely than those who are not victims to be depressed, have high levels of suicidal thoughts, and have a number of failed suicide attempts too.

Bullied children are also at risk of becoming introverts, having low self-esteem or becoming low-achievers during adulthood, Stopbullying.gov. It is very pathetic as people - especially young people - show little concern about this pressing social canker. There is no denying the fact that bullying curtails the rights of its victims and has adverse effects on them. Hence, it is pivotal that society works harder to curb this alarming menace.

I have been a victim of bullying - a couple of times - and though I recovered from it, the experience was terrifying. Though the bullies did not realize its effects on my mental health, it adversely affected me. Nonetheless, I was always saddened when I watched other people go through such self-perpetuating experiences but I could not do much to rebuke the wrongdoers.

As a victim of bullying, I strongly condemn this inhumane act and call on all and sundry to contribute their quota towards nipping this problem in the bud.