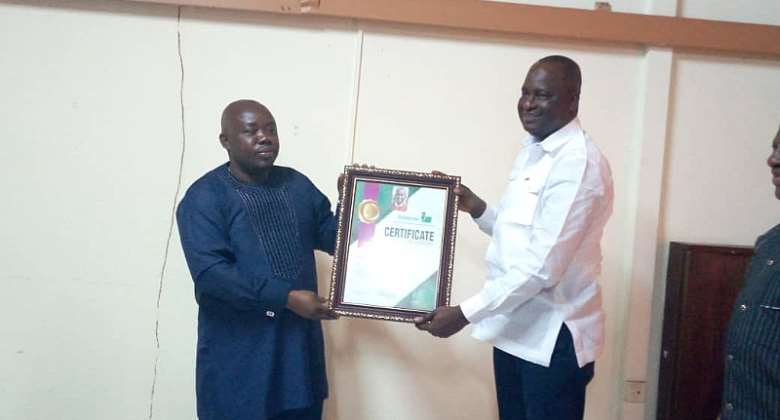 The Upper West Regional Minister, Dr Hafiz Bin Salih, has received a certificate of recognition for his development-oriented activities from the Voiceless Media and Consult at a ceremony in Accra.

Presenting the Award to Dr. Hafiz Bin Salih, which came with a Ghc40,000 personal Accident Insurance cover from the Best Assurance Company, Chief Akilu Sayibu of the *Voiceless Media and Consult* stated that it was time for the media to not only focus on publishing the negatives in state agencies and appointees but to also honour and recognize good leadership skills whenever the need be hence the Voiceless Media Awards.

Chief Akilu disclosed further that during its monitoring of the Upper West Region, it came out that Dr. Hafiz has made it part of his duty to closely monitor all ongoing government projects in the Region to ensure value for money, quality execution and timely completion which the Voiceless Media described as very positive and laudable.

A commitment and an elaborate operation to prevent the smuggling of fertilizer out of the Country through the Upper West Region by Dr. Hafiz led to bumper harvest in the Region as farmers in the area were able to use the fertilizer for their planting for food and jobs activities.

Receiving the Award, Dr. Hafiz Bin Salih thanked the Management of the Voiceless Media and Consult for the recognition given him and stated that it will spur him on to continue to do his best for his people.

The Chief Director at the Ministry of Local Government and Rural Develoment, Mr. Charles Dondieu, who is also from the Upper West Region, advised Public Servants to always perform their duties in the best way that they can to probably receive recognitions too in future. He added that the award of the Regional Minister who was not even aware that his performance was being monitored should encourage all to put in their best in all their endeavours.

Present at the ceremony were members of the Voiceless Media team and some officials from the Local Government Ministry.

Mankessim murder: Another suspect grabbed at hideout
4 minutes ago