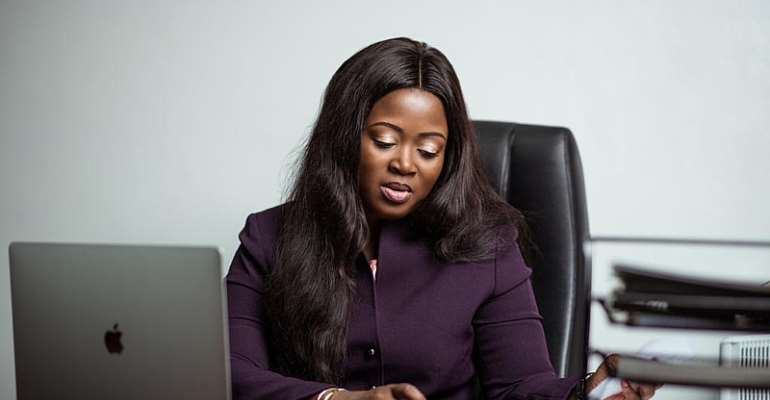 As a star achiever, Ms Dwumah has achieved her dream to become a business leader and a top corporate legal practitioner in the country.

She is a woman of many parts-a business executive, a human resource practitioner, a lawyer, a teacher and a politician, with over a decade of experience in banking and finance and education sectors, among others.

Breaking the cycles of obstacles
But the beautiful looking Ms Dwumah went through some obstacles before becoming the hot cake of most employers in the West African country.

Her dream of playing a key role in the corporate world, particularly as a legal practitioner nearly hit on the rock.

Ms Dwumah's plan after completing her 'O' and “A” level was to enter the University of Ghana to pursue a Bachelor of Laws (LLB). But her mother's financial position wasn't good at that time.

To this end, she enrolled at the St. Louis Training College in Kumasi in the Ashanti regional capital so she could save some money from her allowances and pursue her dreams.

From Ms Dwumah's own mouth: “I came out of training college with “two certificates” my Teacher's Certificate 'A' (which is Diploma now) and a baby boy. I delivered just two weeks after writing my last paper. I didn't plan of having a baby then but it happened and I had to deal with the consequences.”

She was posted to the Fiapre St. Thomas Primary School, three months after having her first child at the time when her caring mother was out of the country.

Ms Dwumah therefore had to depend on some elderly women who used to sell basic commodities under trees on the campus of the school to look after her baby during class hours.

She would rush out to breastfeed and cuddle her baby during break periods. Ms Dwumah had her second baby in the second year of teaching in that same school and this time her mother was around to support her and the children.

In her words: “My mother advised that rather than staying at home and having babies, I should rather focus on furthering my education so when my second child was a little over a year, I went back to school. By then, I had taught for three years and could apply for study leave.”

Her breakthrough
Initially, Ms Dwumah had wanted to go to the University of Ghana to pursue Law but realised the school no longer offered Law as first degree.

So, she opted for a Bachelor in Education in English Language from the University of Education, Winneba, thinking that could help in her journey to become a lawyer.

After completing her first degree, Ms Dwumah taught English and English Literature at the OLA Girls Senior High School, Kenyasi in the Asutifi District in the Brong Ahafo Region for a year.

She then decided to write the entrance exams to the Law faculty at the University of Ghana in 2007 and passed and went through the interview and got an admission.

Ms Dwumah has weathered through all these obstacles to become the Managing Director SIC Life Savings & Loans Company Limited (SICLife S &L), a leading NBFI in the country.

What is SICLife S & L?
SICLife S & L, formerly SICLife Trust Finance Limited, was licensed by Bank of Ghana under the Banking Act, 2004 (Act 673) on 27th July 2010 to operate the business of a FINANCE HOUSE.

The company received the licence to operate as a Savings and Loans on 15th July 2015. It is a wholly owned subsidiary of SIC Life Company Limited, Ghana's leading Life Insurance Company.

In the short to medium term, the strategic priority of the company is to become a highly profitable non-bank financial institution that is able to deliver sustainable returns to our shareholders by offering high quality and innovative products and services with competitive interest.

Since assuming the helm of the state-owned NBFI in July 2017, she has steered affairs at SICLife S &L so successfully that she was voted the Most Respected CEO in the Non- Bank Financial Institutions (Savings and Loans) at the second Ghana Industry CEO Awards held in the Accra International Conference Centre on 29th November, 2019.

Under the dynamic leadership of Ms Dwumah, the company's asset base has since grown from GH¢8.1 million in 2013 to over GH¢200 million in June 2017.

Furthermore, she is poised to sustain that growth and get it to contribute more to financial intermediation, especially among small and medium enterprises in the country.

Also, a star achiever, Ms Dwumah has achieved her dream to become a business leader and a top corporate legal practitioner in the country.

Before her current appointment
Before her appointment as the Managing Director of SICLife S &L in 2017, she was the Legal Officer of the Bank of Africa Ghana Limited from September 2015 to May 2016.

Ms Dwumah was responsible for drafting legal agreements for and on behalf of the Bank of Africa; reviewing all legal correspondence between the bank, its customers and all third parties; registering deeds, titles and all security instruments for the bank, among other.

She was a solicitor/secretary at Golden Pride Savings & Loans Limited, from January 2013 to January 2014

As a politician
Ms Dwumah has publicly shown her affiliation with the Loyal Ladies, a volunteer group under the youth wing of the governing New Patriotic Party (NPP).

Her interest in politics she narrated dates back to her early years when she helped her mother who once served as a Brong Ahafo Regional Organiser of the NPP.

Although Ms Dwumah has been a card bearing member of the NPP since 2008, she actively entered politics during the 2012 and 2016 elections.

Ms Dwumah
In recent times, the Neonatal Unit of Sunyani Regional hospital has received two Phototherapy Units in separate donations; the Kwatire Polyclinic has also received an incubator through her philanthropic activities.

For instance, for the past four years, she has been making donations to celebrate her birthday.

In May 2019, as part of her annual donations to the orphanage, she donated food items, detergents, bedding and other household items worth thousands of Ghana Cedi to the Hanakkah Children's Home, where abandoned children are housed, and the Don Bosco Boys Home, which provides shelter for streets boys of school going age, both in Sunyani.

She graduated with a Qualifying Law Certificate from the Ghana School of Law. She was trained as a teacher at the St. Louis Training College.

She, however, hasn't rested on her oars but still pushes to achieve a greater feat in the corporate and political world. Ms Dwumah, therefore, continues to upgrade her professional competencies by undertaking various professional and educational programs.

In the past years she has done Diploma in Banking Innovations and Financial Strategies), Boulder Microfinance Training Program, Concentration in Digital Financial Services. Both were obtained from Galilee International Management Institute, Israel.

Her relentless efforts in acquiring knowledge pushed her to further pursue a course in Creating Innovative Practices and Strategies (ILM endorsed) from Crown Agents, London.

Member of GBA
She is a member of the Ghana Bar Association (GBA), and was inducted into the Feminine Ghana Hall of Fame, a group of accomplished professional Ghanaian women who have acted as mentors to young women, in July 2019.

Ms. Dwumah is who a native of Awuah Odumasi in the Sunyani West District of Bono Region stands for faith, integrity, excellence and equity.

She has a strong appetite for success, a problem solver, and also possesses strong organizational and leadership skills.

Ms Dwumah is one of the young business executives to be watched out for.