Ovie Soko -Colouring Outside The Lines 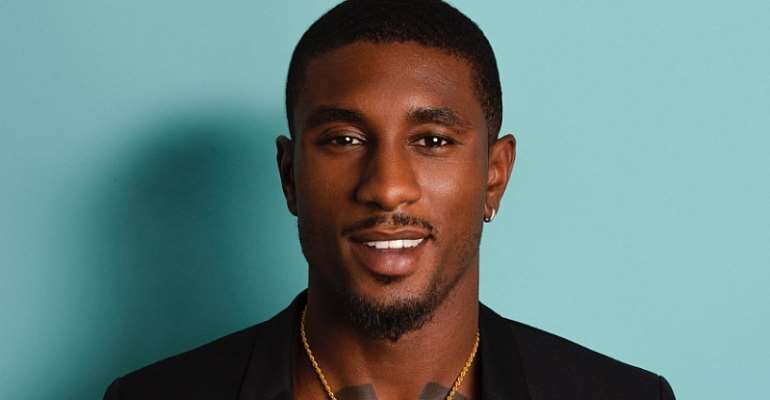 When Ovie arrived at the Glam Africa studio in central London, I wasn't too sure what to expect. On one hand, I'd spent the better part of my summer holiday glued to my TV screen, shamelessly caught up in the Love Island media storm. On-screen, Ovie was a pure delight. You could hardly open your mouth to criticise him. But that was a short while ago. Back then, he was just Ovie Soko, your average, 6 foot 7, unfairly good-looking basketball player. Now, he was Ovie, a national treasure with millions of fans across the UK and beyond, so could we really expect him to be the same person we'd seen on screen earlier on in the summer? Plus, there were some strange rumours circulating in the Twittersphere that the Love Island producers had done some creative editing to make Ovie appear slightly more pleasant than he always was.

But none of that mattered now, because suddenly, Ovie, once a figment of my TV screen, had materialised at the top of the staircase, followed closely by Gemma, one of his managers. He made his way downstairs, lowering his head as he walked, to avoid hitting the ceiling. Welcoming him warmly, I offered to help him with his suitcase. He politely refused, determined to pull his own weight for those final few steps. Later, he would ask me where he could find a bin, and subsequently decline my offer to dispose of his trash for him and insist on doing it himself. It was admirable, if not supererogatory. After all, he was the star, the man of the hour, the guest of honour. But it quickly became clear that any form of special treatment was not on his agenda.

He took his time to personally greet everyone in the room, from the Glam Africa intern to the photographer, to the stylist, charming them all along the way. He struck me as the kind of person who would be popular anywhere he went. He must have known going into the Love Island villa that he would become a viewer favourite. And yet I wondered if he could have ever really known just how much of a sensation he would become in the days and weeks that followed his entry. "I had no idea about the public response because I was in there for so long. I wasn’t expecting anything in particular when I came out of the villa, but being out, it’s been dope. My cousin, who went to school in Nigeria told me I'm even getting love out there. That blew my mind. I didn't even think the response would be so big here, talk less of back home. The love has really been crazy." But crazy doesn't even begin to describe it.

So how does life outside the villa compare to life on the inside? "In the villa, it’s a very different environment. You’re around a lot of different personalities and I guess some of them aren’t people you would normally interact with in your day-to-day life. It’s very different from that standpoint because you’re thrown in there with all of these different characters. It's a big space, but once you’re there 24/7, everyday, it becomes a really small space. So it was a different experience, but it was dope at the same time."

Well, thanks to that experience, Ovie has joined a league of hypervisible African men whose individuality and creativity are helping to change the narrative surrounding blackness and masculinity. From Virgil Abloh to Edward Enninful, African men continue to thrive in the global creative space, and newcomer Ovie has a lot to learn from his predecessors if he's going to take on the industry. "We sort of just met as two black men," he said of his recent sit-down with British Vogue editor-in-chief, Edward Enninful. "He’s done very well for himself in the fashion space, he’s done great things. I was able to sit down with him and just catch up and hear his views. Maybe we’ll get to work on something in the future, but all of that stuff is still in the pipeline so we’ll see."

There is a lot happening on set at the moment. By now, Ovie has done all his fittings and the photographer is ready to get going. I plug my laptop into the in-house speakers and select my favourite iTunes playlist. The bass-line begins on track 1. It's Zombie by Fela Kuti. Ovie dances and hums along with the blaring horns, playfully mimicking trumpeter movements with his fingers. "He's dope, man," Ovie says, when asked for his opinion on Fela. "Fela is to Africa what Bob Marley is to the Caribbean. He’s huge. There’s not an African artist or even an artist outside Africa in the musical scene that won't know who Fela is." It is evident how much he loves talking about Nigerian culture, food and music, even though, as he admits, he hasn't been back since he was a child. At one point, Ovie attempts to zanku, and although I can see a hint of the popular West African dance somewhere in his hip and shoulder movements, overall he looks more like a salsa dancer than a zanku warrior. He knows he looks silly, but he doesn't care one bit (a distinctly Nigerian trait). He's enjoying himself, carefree and uninhibited, in true African fashion.

"I mainly know about Nigerian culture through media, and also through my parents and family. I have relatives come over here quite a bit but I haven't been back to Nigeria since I was five. I've wanted to go back now for a really long time. I grew up in England and that's a huge part of who I am, but there's a whole other side to myself that I still want to explore a lot more. I want to go there, experience the culture for myself and see all the things that my parents and cousins tell me about." And Ovie is not alone. With the year 2019 officially declared the "Year of the Return", people across the African diaspora have been itching to go back to the motherland, and many, for the first time. Diggy Simmons, Steve Harvey and Jordyn Woods are just a few American celebrities who have made trips to West Africa in the past year, and many more are expected to follow suit in the months and years to come.

So what exactly is causing this surge in interest? One key factor is the booming creative scene, which in recent years has even caught the attention of mega-icons like Beyoncé and Naomi Campbell. Every year, the continent of Africa reaches new frontiers in sports, music, fashion, literature and art, as more and more people begin to explore opportunities outside of the traditionally acceptable career choices. "I feel like I'm in a very privileged and blessed position, because I know that people who come from an African background tend to be pushed into certain positions. You're usually pushed to become a doctor, or pushed to become a lawyer, because that's what's been respected in that culture. But now I feel like we're in a moment where we're breaking out of those boxes that society has tried to put us in. I see it a lot now in the Nigerian community. We're being very creative and just being ourselves. That's something I want to be a part of, I want to mentor people out there and here as well. I want to help people to grow into themselves. I still meet people who see me playing basketball and they're like, 'man, I wish I could've done something like that'. When I go back to Nigeria, I'd love to see more of the younger generation taking charge of who they are and who they want to be."

In September, Ovie launched his debut clothing collection, in collaboration with fashion brand ASOS. Unveiled at the #NationalOvieDay celebrations during London Fashion Week, the ASOS x OVIE collection featured a diverse range of pieces, some of which incorporated artwork from Ovie's "biggest role model", his dad. "I look up to my dad more than anyone outside of my house. He’s very real to me. It’s huge to have that sort of relationship with my dad." Like his father, Ovie sees immense value in the arts, creativity and self-expression. As part of the six-figure father-son clothing deal, Ray Soko granted ASOS exclusive access to more than four decades-worth of his artwork, including an expansive collection of paintings and sketches inspired by his West African upbringing. "My dad is an artist so he's not exactly in those traditional boxes either," Ovie reflects. "Fully diving into a profession or something that’s outside of the norm can be a huge risk, but my dad has always just told me to shoot for the top."

On set, the light flashes for the thousandth time, and letting out a sigh, the photographer declares the shoot over. The evening ends with cheers and hugs, and after all those hours, Ovie's spirits are still as high as when he first walked through the door. We could have spent days speaking to Ovie, but the short time we did spend with him has left us with a lot of insight into his upbringing, his outlook on life and of course, his hopes and aspirations for the future. Whether he's onscreen or off, Ovie's fun-loving, quirky and courteous nature follows him everywhere he goes. With his passion, drive and the right people in his corner, the sky is really the limit in terms of what he could go on to achieve.

So what message does Ovie hope we take away from his growing success story. It's simple, he says. Just be yourself. "Don't try to just follow anyone else. Figure out who you are, first off, and never apologise for being who you are. Don’t be concerned with trying to be like someone else because you'll never be able to do that as well as just being yourself."