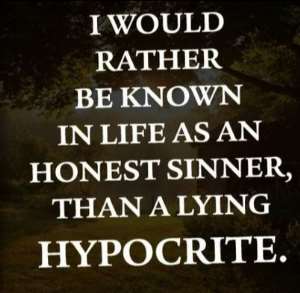 In our world today there are many movements. From feminism to Liberalism to the fight for equality, human rights and animal rights. There are the self-righteous at church who want to purge all sin and sinners, yet don't recognise that they also sin. There are the we should all be independent preachers. There are those fighting for traditionalism. There are the left wing and right wing political and social advocates. There are many who preach loudly however fail to practice what they preach.

Today I'm going to address the problem of Pharisees of the world. Whether you are a Christian or not, Jesus's rebuke of the Pharisees is a warning we should all heed. Beware of the leaven of hypocrites. Those who practice but don't preach " observe whatever they tell you, but not the works they do. For they preach but do not practice. 4 They tie up heavy burdens, hard to bear, and lay them on people's shoulders, but they themselves are not willing to move them with their finger. 5 They do all their deeds to be seen by others. For they make their phylacteries broad and their fringes long, 6 and they love the place of honor at feasts and the best seats in the synagogues 7 and greetings in the marketplaces and being called rabbi by others." (Matthew 23, 3-7)

Some people latch themselves to movements and ideals because they like the title and the perks they get from it. However, they don't see it fit to live by the principles. Beware of believing what someone says and then trying to live your life by it. There are many politicians who can speak against corruption, yet they themselves enjoy it. Many pastors and self righteous people love sinning yet condemn others for it. There are feminists who step on women and others to get ahead yet condemn it. There are many charities who steal money from the poor yet condemn inequality. There are many who don't believe in being a side chick in public however are side chicks in private.

Everybody has their own way of getting where they want to be. Just because someone has a title, accolades and awards doesn't mean that they do what they say or even believe in what they advocate. Some people like the title of being a human rights advocate, a pastor, an elder, an honourable, an equality advocate, professor, imam, celebrity, whatever you can think of. However, they used crooked means to get to their position and stay there. Even in friendships and in family some people want a good name to use you.

However, because people hate honest people that's why they are continuously fooled by hypocrites. A good or bad honest person who showcases the real life they lead is always better than a hypocrite. Hypocrites tie heavy burdens on others yet don't lift a finger of that burden themselves. Those of you who admire people who have got big positions, money, a title or seem to be a great advocate for equality or something you like, be careful not to compare yourself to them. You don't know how they got what they have. The sad thing for hypocrites is that sooner or later they are found out, a person's real character cannot be hidden forever. Don't be mesmerised by titles, positions, speech and lifestyles. Be mesmerised by someone who tells the truth. Be mesmerised by yourself, look up to your God or yourself. Don't follow anyone.

Watch out for part 2 of the series.