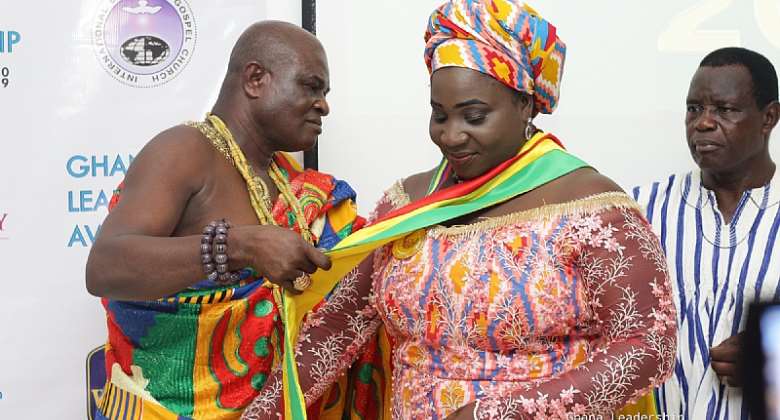 Celebrated media personality, Kobi Hemaa Osisiadan-Bekoe, is TV Personality of the Year 2019. This happened at the Ghana Leadership Awards held at the weekend.

At the event held at the Accra City Hotel, the entrepreneur, public relations practitioner and a consistent Made-in-Ghana campaigner received commendations from high profile personalities.

Ghana Leadership Awards is a prestigious event that seeks to celebrate and recognize the most outstanding and exemplary leadership that positively impacts the development of Ghana and Africa as a whole. This year’s event was held under the theme: ‘The Leadership Future of the Ghanaian and the African Youth’.

According to the organizers, the honors were conferred on Osisiadan-Bekoe to celebrate her outstanding and exemplary leadership in the media industry and her consistent promotion of ‘Made-in-Ghana’ for over a decade that has a significant and positive impact to advancing Ghana.

The award winners in a group photograph
Osisiadan-Bekoe first appeared on TV in 2007 as the host and producer of ‘Ghana’s Pride’, a TV show which aimed to showcase and market Ghanaian products, culture and also addresses trade and industry challenges. She has since 2007 promoted ‘Made-in-Ghana’ through television content production, advocacy and her adornment in African wear ranging from headgears, accessories made with beads and native sandals, popularly known as ‘ahenema’.

Speaking to the media, she expressed her profound gratitude to all the media owners who have given her the opportunity to showcase her talent through their network. She also indicated that, it is her passion to support entrepreneurship in the country, adding she is committed to serving the good people of Ghana.