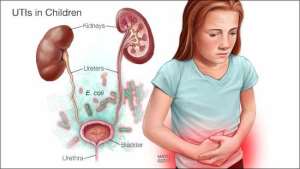 Young children are as sensitive as they are carefree which leave them susceptible ta number of infections and health concerns that demand special care and attention constantly. In the initial few years of their life, kids generally tend tcatch a lot of bugs. Cold and other infections hence become extremely common among them. One of the most severe infections that can be happen tkids is that of urinary tract infection (UTI). While it is mostly believed that UTI occurs only in adults, it has been reported that up t8% of girls and 2% of boys get a UTI by the age of 5 years.

The urinary tract of the body includes the bladder and kidneys along with the tubes that connect them. When germs find a way intthe urinary tract, infection is caused. In kids, UTI usually occurs when bacteria from their skin or poop enter the urinary tract and multiply. Girls are more likely tget UTI as their urethra is shorter, which makes it easier for the bacteria from the anus teasily enter the vagina and urethra. In the case of boys, those whare not circumcised have a slightly higher risk of UTIs. Children with a problem called reflux (vesicoureteral reflux or VUR) are more at the risk of infections. At times some children are even born with this problem or other birth defects of the urinary system that lead treflux.

Some children are more likely tget UTIs if they already have some problem with their bladder or kidneys. Urine flow tends tblock and germs get a chance tmultiply due tthe narrowing in the urinary tract.

What enhances the trouble is that the symptoms of this infection are hard tnotice in kids. However, it is very crucial that the child receives adequate treatment on time before the UTI transforms inta more serious kidney infection.

If the UTI happens in older kids, the symptoms are mostly clear. The main symptoms being:

However when it comes tyounger children, very careful attention and observation is required ttake note of these symptoms. When it comes tinfants, the symptoms are likely tbe more general including:

Other UTI symptoms are:

The major cause as explained above for UTI is the entering of a bacteria intthe bladder. These bacteria can be commonly found on the skin around the anus and/or near the vagina. Usually, bacteria are not there in the urinary tract but some of the following things facilitate the entry of the bacteria and their stay:

As applicable for most life situations, prevention certainly is better than the cure in case of UTIs tensure that your kids are not caught by these infections. Some of the preventive measures that can be adopted include: