How I Saved My Marriage: I Learned To Relax 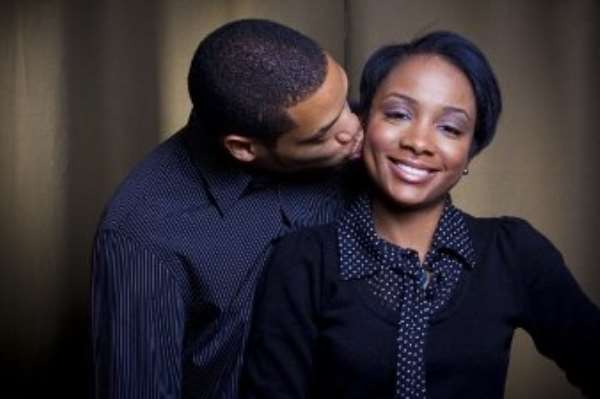 I started going to yoga because I wanted to get rid of my muffin top. I was out of shape. And I loved cupcakes. So I put on baggy gray sweatpants, drove to the tiny yoga studio near my home, and took one of those $5 community classes.

The hour and 15 minutes passed slowly. I couldn't touch my toes. But when I slipped into my flip-flops at the end of class, I knew I'd be back.

It wasn't long before I could touch my toes. I loved that I could feel myself getting more flexible. And stronger. I started pulling off poses that previously would have landed me flat on my face. I was hooked.

That feeling — of accomplishing something that had once upon a time seemed impossible — was exhilarating. I started attending four to six classes a week, all the while learning how to relax myself.

Aside from the thrill I got, it was just good to get out of the house. As a full-time freelancer, I often get lonely working from home. I have three cats, but our conversations tend to be one-sided. I have Twitter, but I've heard that doesn't count.

My husband, Michael, doesn't arrive home from work until late in the evening. When he eventually walked through the door, I'd invariably try to share all the things about my work day, all at once. But it wasn't really fair to rely on him as my sole social outlet.

Besides, things had been weird in our relationship lately. About a year and a half earlier, I'd gone off my SSRIs and my mood-stabilizing birth control because we wanted to start a family. This was risky, as I suffered wild mood swings and sometimes morphed into a psychopathic Hulk Smash version of myself. But we figured the risk was worth it.

When a year had passed, however, and we still hadn't managed to get me pregnant, things changed between us. We stopped communicating. We stopped being good to each other. Each of us was already disappointed and heartbroken by our struggles with infertility, obviously, but this was compounded by the fact that each of us suddenly felt unloved by the other.

He coped by bar-hopping with his colleagues almost every night, in a gesture of avoidance. I coped by seething with resentment until — again and again — it all boiled over and we ended up screaming at each other, late at night, my ring flung across the room, my foot out the door.

Several months before I started attending classes at my local yoga studio, we almost separated. And even though we eventually agreed to fight for our marriage, I still felt I was walking on eggshells.

Suddenly, I was managing my chronic depression and anxiety just fine, without Lexapro or Xanax or Yaz. Suddenly, I no longer had to worry that I might devolve into a raving lunatic over some small slight or disappointment. Despite my brand new existence as an Enlightened Being, however, I wanted more. I wanted to feel this way all the time.

There were still things in my life that left me frustrated and angry and overcome — our infertility issues, our real estate troubles, the shaky state of our marriage — and I wanted to know how to save our marriage and how to let go of these emotions.

So I fled again, this time to a weekend yoga and cooking retreat in Vermont. On the last day of our retreat, we did an early morning flow and then arranged our yoga mats in a circle. On the first day, our teacher had asked us to share why we were there, and what we were hoping to accomplish. This time around, she asked us to share what we had learned.

When it was my turn, I drummed my fingers on my knees and stared at my toes. I picked imaginary pieces of lint off my mat. I snatched a glance around the circle and then swallowed.

"When I came on this retreat," I finally said, "I was angry about so many things in my life." I paused. They smiled encouragingly, so I went on. I told them about our failure to get pregnant. Our inability to sell our one-bedroom condo without taking a huge financial hit. A handful of things that, when put together, made me feel hopeless and helpless and frustrated with life.

"But this weekend," I said, "I kept feeling these immense waves of gratitude. That I had yoga in my life. That I was on a yoga retreat. That I was at a place in my life and in my career where these things were even possible."

My fellow yogis nodded.
"Basically, I realized that I have a lot to be grateful for," I said, feeling that I was sliding dangerously close to having a Lifetime Original moment, "so I should probably just chill the eff out."

When I returned home from my retreat, I tried to look at everything through that lens. With every disappointment, I reminded myself of everything I had to be grateful for. With every small frustration, I tried to practice empathy.

Sometimes it made me feel better. Sometimes it didn't. But it was a work in progress. As Donna Farhi wrote in Bringing Yoga to Life, "Life does not become easier; we become easier with life just as it is."

Still, I found it particularly tough to apply all of this newfound wisdom to my marriage. After all, it's often those we love the most to whom we act the most insufferably. But Farhi also wrote that "harboring resentment is like drinking poison and waiting for the other person to die." She went on to write, "we manufacture our own torment by failing to detach ourselves from things that ultimately we cannot change in another."

I had to let go of the need to control his behavior when he spent five hours playing a video game instead of spending quality time with me. I had to practice restraint and withhold judgment when he spent the entire day in his pajamas, watching TV, eating chips for every meal.

Instead of flying off the handle for things that, in the grand scheme of things, didn't really matter, I had to remind myself that this was the same person who took me hang gliding for my 30th birthday, even though he had a fear of heights. Who raved about my writing work to his friends and colleagues. Who eventually attended the very first yoga class I taught, even though he couldn't do a downward dog to save his life... and couldn’t care less if he ever did.

Realizing this was a revelation, and I've since tried to be mindful of the way I react to Michael when my first instinct is to nag or complain.

I recently asked Michael if he felt my yoga practice was having a positive impact on our marriage. He acknowledged that, yes, my yoga had done more for me than my meds ever had and, as a result, we fought less and got along better than ever before.

"But you're also around less," he said, "which is good and bad."

I narrowed my eyes. "How's it good, punk?"
He laughed. "It's good because I have the house to myself more often. I don't feel bad when I spend five hours playing video games, or eat chips for breakfast while watching TV." He paused. "But it's bad 'cause when I want you home, sometimes you aren't there."

I was speechless. I thought back to the time we almost separated, when I'd felt such resentment over the fact that he rarely came home before I had finally given up on him and gone to sleep. I thought back to all the times I'd missed him so desperately, feeling like the lowest priority in his life. I thought of the ways in which I used to place so much pressure on him to be my main social outlet, to be my everything.

Once again, I felt a deep gratitude for my yoga.

It seemed all I had to do — besides live with gratitude and practice santosha and learn how to reach my legs behind my head and go into a deep backbend — was give Michael the time to miss me.

More Love & Relationships
ModernGhana Links
[VIDEO] How to win the battle with broken heart
Dear You
Love Is A Beautiful Thing
VIDEO: How to maintain the vibes with your new found Love
Newly wedded Abena Moet says there is nothing special about marriage
How To Identify And Understand Narcissists
How To End A Controlling Or Manipulative Relationship
How To Deal With A Partner Who Thinks You Are Always Wrong
How To Deal With A Toxic Relationship
TOP STORIES