Have you ever had the displeasure of working with one ?
By Akosua Tuntum Nahana 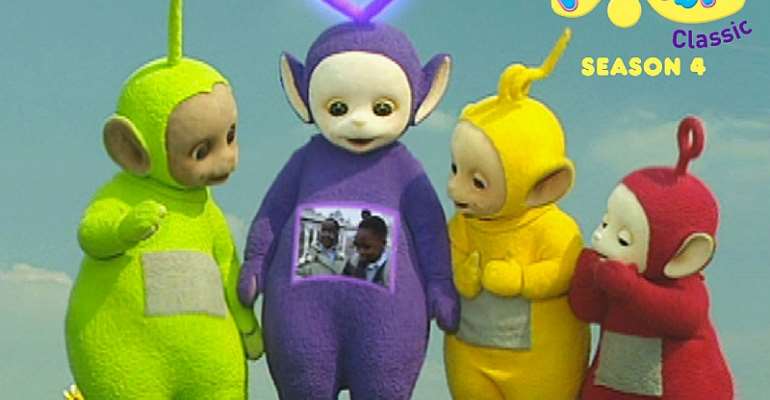 Teletubby bosses, supervisors and colleagues gain pleasure out of bullying and watching other colleagues fail. They are constantly either watching CCTV or scanning their eyes around looking for another colleague to slip. They are not an Anas type of whistle blower and they don't do anything for the good of the company but for their own sadistic pleasure. I call them the dark teletubby ( Teletubbies bring joy to children). These colleagues however because of their lack of decency only bring a toxic work environment.

They are the snitches at work who tell on others for petty things, like taking a mini break. For example a supervisor in one company reported 2 sales associates and a warehouse associate for taking a minute break and going on phones. Everyone in the company does that. However, the supervisor does not report his friends. The boss then checked CCTV and disciplined the employees. Nevertheless, the boss got angry when one of the sales associates reported that supervisor for spending about 20-30 minutes with his fiancé during sales time and unnecessarily going on his phone during work hours.

This is a company which makes thousands a day yet can fail to pay employees on time ( The management breaks employment law with no qualms) some employees even have to wait for 3 months until they get their pay. Yet the same management responsible for payment make a big deal out of an employee being one minute late. Now if someone curses them or takes them to a witch doctor that person will be labelled as wicked. That was a joke please don't take it seriously.

However, such people don't realise wherever human rats think their clever, God and karma are cats waiting to pounce on them. If you're such a boss, supervisor or colleague, be careful.

Another type of Teletubby is the bully. This is the colleague, boss, or supervisor who shouts at staff, intimidates them or excessively micromanages staff. Some colleagues also imagine they are supervisors and micromanage you. Most often , they are low level performers who suck up to the boss ,and point out others flaws to stay in the company.

Beware of them, they will lie, cheat, use your words against you and do anything to get ahead. Their talent is sub par, and often they target successful workers out of jealousy. They also target workers who don't fit into a clique. The best way to deal with the colleague bully is with sarcasm, calmness and no contact. Give them no reaction whatsoever, ignore them, do your work and let them talk to themselves. Any reaction will be used against you.

The bully supervisor and bully boss have terrible leadership skills. They always know best and are not willing to listen to staff under them. They can easily do the wrong thing because of their arrogance, yet will expect you to fix it. They will never apologise or admit they are wrong. They make you do more work than you're contracted to do and take advantage of you.

They lie to you about company policies, procedures or anything to do with your job. They often make threats about your job stability or threaten to make you pay in someway. They have favourites, engage with the colleague bully and spread rumours, gossip or demean staff. Their only goal is profit and they will do everything to let you know who is boss. Often not everything done in companies with bully bosses and supervisors is in line with the law because they are corrupt.

This moves me to my next point, the Teletubbies hate whistle blowers. If you do anything to report the issues in the workplace you face because of them, they will do anything to destroy you and do it sneakily. You won't see it coming. However, every fly can meet a spider. One day they will become entangled in a web.

These are few examples of Teletubbies at work. Imagine them as Teletubbies. Tinky-winky, Dipsy, Lala and Po. They won't seem so scary then, because they are really sad beings who have no concept of self or happiness. Anyone with a healthy self esteem won't be participating in rat politics. Remember, they are men and women who haven't learned to stand in their sex and their identity ( Tinky-winky), if you experience them you know they hardly make sense and you often wonder why they are so silly ( Dipsy), they don't think far, they don't think. Madness, ( Lala) and their immature babies ( Po). They either watching you all the time or checking CCTV to see what you do wrong, that's what makes their bellies full , it's like they have a TV on their belly. That's why I call them Teletubbies. They are watching you all the time, to give their stomach satisfaction.