Going back to give back 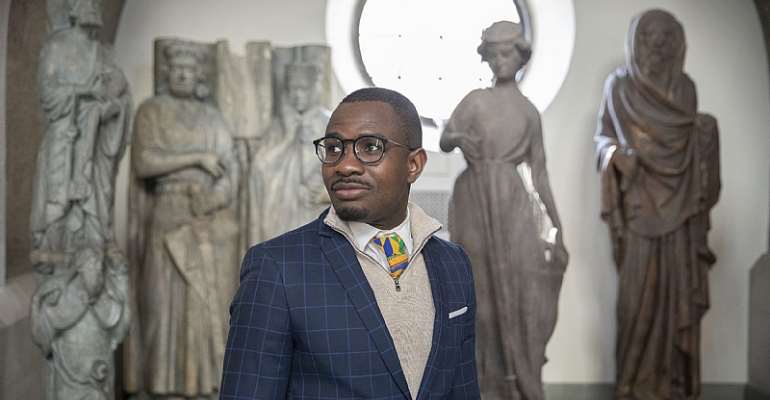 After graduation, MacLean Sarbah is heading to his native Ghana to take on one of the country’s biggest social problems — youth unemployment]

From a rural town in the south of Ghana to his time at Harvard University, one thing has been a constant for MacLean “Mac” Sarbah : a willingness to help others succeed, especially the young.

His approach has been education. In Ghana, he volunteered as a middle and high school teacher in Mepe, where his parents were born. When he came to the U.S., he helped raise funds for an internet facility for students in Mepe. During his time at Harvard, he’s run a pro bono advisory service that has helped students from Ghana and other countries apply to universities around the world.

And in May, after Sarbah graduates with a master’s degree in design studies from the Graduate School of Design (GSD), his next move will line up with what he’s been doing all along.

Sarbah, who left Ghana in 2006 after winning the Diversity Visa lottery, will return home to help take on one of his country’s biggest social problems: youth unemployment. To do that, he means to start an entrepreneurial education program for Ghanaian youth that he hopes will help spark an “innovation ecosystem” in the country, where, according to a 2016 World Bank report on jobs, 48 percent of youth between 15 and 24 are unemployed. The topic is pressing not only in Ghana but all over Africa, which contains the 10 countries with the youngest populations in the world.

“It’s a troubling issue,” Sarbah said. “When you think about that in terms of repercussions — mass migrations, violence, young people who don’t have jobs — it looks apocalyptic.”

Along with classmate Francisco Colom, M.A. ’19, Sarbah hopes to create a support system that provides young Ghanaians with the requisite skills and knowledge to enter the workforce. One component the pair is currently focusing on is creating a fellowship focused on entrepreneurship for college-aged students. If successful, the program will educate and train students to start their own businesses.

“For me, it’s just an accumulation of a lot of things I’ve done,” Sarbah said. “I want to help young people in Ghana by giving them the tools to see social problems as entrepreneurial opportunities. Even if they don’t end up becoming entrepreneurs there’s a belief that they would have acquired leadership skills that are very central to the job market, like communication, teamwork, and things of the sort. In a way it’s a two-pronged approach.”

Sarbah calls it Ghana’s Global Youth Entrepreneurship Fellowship. The program would take about 100 university students six months to a year from graduation and connect them with experts — through lectures, workshops, and one-on-one meetings — on how to identify social problems, develop holistic strategies to address them, and design a business to carry out their strategies. 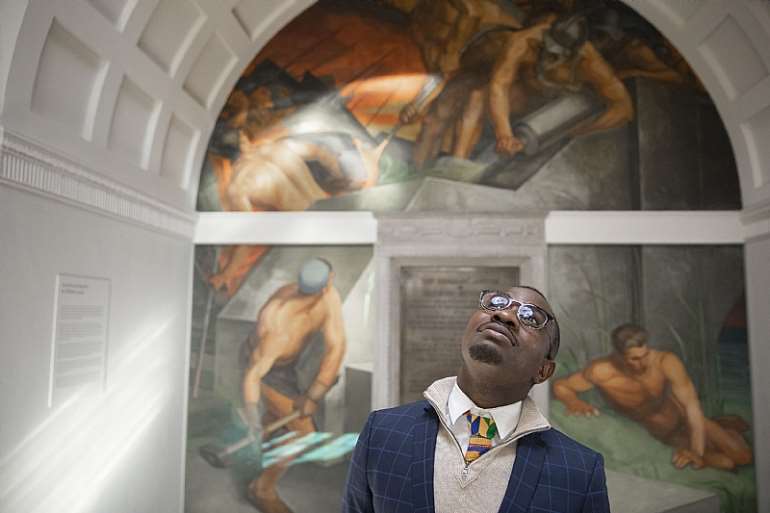 Sarbah was one of the only students from his high school to attend the University of Ghana. He graduates in May from Harvard GSD with a master's degree in design. By Kris Snibbe/Harvard Staff Photographer

Sarbah was partly inspired by a course he took last year, “Contemporary Developing Countries: Entrepreneurial Solutions to Intractable Problems,” with Harvard Business School Professor Tarun Khanna. In it, Sarbah and Colom developed the initial business plan for their venture, bringing together an interdisciplinary mix of Harvard students to think about economic and social problems in developing countries and identify potential solutions.

Sarbah and Colom are currently refining their business plan, discussing partnerships with universities in Ghana, and seeking funding. They expect to do a lot of traveling back and forth between Ghana and the U.S., taking advantage of networking opportunities in both countries.

Sarbah’s journey to Harvard from Yeji, the rural town in Ghana’s Bono East region where he was born, was a long one. Growing up, he shared a home with seven other family members but no electricity. For drinking and bathing water, he walked three miles to Lake Volta. Sarbah one of a few students from his high school to attend the University of Ghana. He remembers long nights studying by kerosene lamps. “Sometimes the smoke from that would make your eyes red and teary,” he said. But he persisted, and through education he’s been able to traverse the globe, earning degrees from the University of Ghana, Columbia University, and the University of Cambridge.

But home and helping others like himself have always held his heart and interest. One of the most satisfying ways he’s nourished that calling has been through EdAcme, the advisory service he runs that provides mentorship, coaching, admissions advice, and leadership and professional training to students from developing countries. Students he’s worked with have been accepted to a number of schools, including Columbia University, the University of Cambridge, and the University of Tokyo. Sarbah plans to continue that work as he launches his new venture.

“In many ways,” he said, “my satisfaction comes from helping people, especially young people, maximize their potentials. I think we all have a purpose for being on this planet. It’s important that we spend our energies on making the world better.”