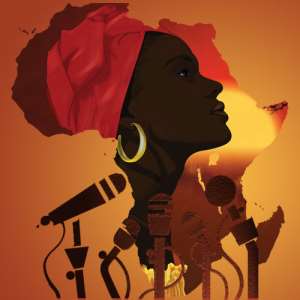 Are men not allowed to be boastful and see women as inferior to them ? Therefore what is so wrong with a woman being at home in her own skin, determining her own destiny, and formulating her own thoughts, a human right.

Of course some men do not want women to be empowered. Who will be their slave ? Who will be at the beck and call, and agree with their opinions wether valid or not. I wonder, don't some men feel bad, when they say their inadequate to feed themselves, wash their own clothes, clean and not cheat. That their masculinity is upgraded by their inability to look after themselves. That the lesser sex ( women) must do it, so they can parade around as men who rely on women for basic survival. That Their moral compass is decided by a woman's actions ( clearly many men are decedents of Adam)

Some men ( and women) don't want women to have an education, because the woman may no longer fit into her cultural role and extend her wings. However, when a woman is educated she brings productivity to her country. Let's look at the women of Kwame Nkrumah's CPP party who were the parties backbone and without them, no independent Ghana. Let's look at Sally Mugabe, without her no independent Zimbabwe. Ellen Johnson Sirleaf changed Libera from a country torn by war, when it was led by men. To a country moving forward in development.

Educated women have changed the course of Africa, let's look at Chimamanda Ngozi Adiche, Genevieve Nnaji, Efua Sunderland, Elizabeth Ohene, Nana Konadu Agyemang Rawlings and many more. Why do we want to stop our girls achieving great heights ? make our country proud and contribute to our development. I'm not only talking about academics, education also includes acquiring vocational skills, like clothes making, beads making, cooking ( which men and women can have as a skill), dancing, farming, hair dressing, mechanic skills and any form of trade. We need female farmers, doctors, lawyers, mechanics, designers and humanitarians. We need females in every trade.

Ghana is dying, and as a country we cannot afford uneducated girls. When all over the world women are getting an education, how will we compete ? We will forever beg and the men will be the ones doing the begging. It seems some of our men will bow down to the white man, Chinese man, Arab man and other men. Sexism exists in every country. However, when it comes to women, women are so inferior that her even having an opinion different to a man makes him inflamed. How dare she ?

How dare she not subscribe to everything that will make her a worthy woman, to be seen and not heard, even if she's seen and heard it must be on mens terms. A woman cannot just be herself, she has to be herself in line with what is acceptable for a woman. Whereas men can be stupid, rude, insolent, useless, women beaters, boxers at work and even in parliament, yet they are not bush men. Only men. Men can commit adultery, yet it's not the same if a woman does it. Men can be served like the king of Zamunda in their homes, yet if he is an equal partaker of domestic duties, the woman is not fully a woman.

There are also those who say that even if a woman is educated and empowered, she must still fulfil all her domestic duties. That means working full time and being the main keeper of the household. That means her being overworked and tired. Meanwhile men are not expected to have a job, as well as domestic responsibility assigned to them. Its never disputed, men never have to justify themselves for having the freedom to work and be empowered. Some men ( and women) then argue women are excellent multitaskers, and ' 'naturally' domestic. It's because women have been trained to be. They've been raised to not be tired, feel guilty for wanting leisure and me time, and to carry an overload burdens with a smile. Like I said in one of my previous articles, there is no cook and clean gene in a woman.

African women are stressed, they carry the burden of looking after themselves, and their so called masculine men. These men depend on them for their self respect, identity, moral compass and self esteem as a man. That's why women's independence rattles them so much, because who are they as a man, if women don't worship them unconditionally. That's a very sad position for our men to be in.