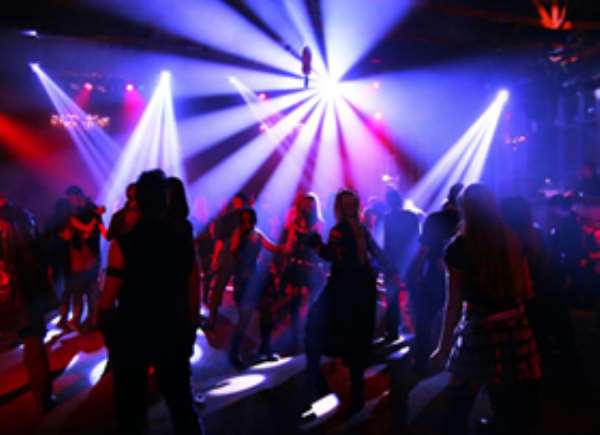 If you were a regular visitor to night dubs in Cape Coast in the past, you will weep for the clubs which used to offer so much entertainment, especially at the weekends.

Not too long ago; clubs such as Dans Paradise (Dans P), Big Apple and Jet Club were hot spots that offered pleasure to revelers.

This is no more. Reason?
Stakeholders in the business in the municipality, say the downturn is due to the activities of churches.

At a stakeholders' meeting at the Elmina Beach Resort with the board of directors of the Ghana' Tourist Board (GTB), they maintained that campaigns launched by the churches which painted the clubs as sinful places had led to the collapse of many of the night clubs.

Consequently, all-night prayer sessions, especially on Fridays by the churches have drowned the once sizzling night life in the tourism city.

Other spots, such as Tina Tavern and the popular Friends Gardens, they noted, were also not in good times with respect to business.

The situation, they said, had rendered the main tourism hub of the nation without night life and significantly reduced tourist activities, thereby affecting employment and economic activities in the city.

They, therefore, called on the churches to allow the city's most visible and once vibrant industry to thrive, saying the relaxation was a part of life.

Ms Pricilla Arhin, a member of the GTB hoard, expressed concern over the dire situation and called for a conscious effort to revive the hospitality industry, which she described as becoming extinct.

The stakeholders also called for a reduction in taxes to help boost their businesses.

But Rev Dr Mills Owoo of the Redemption Baptist Church in Cape Coast says the church preaches about moral uprightness and if that is making the night clubs go out of business, then there is very little it can do about that.

Mr Michael Asiedu-Addo, a teacher and Lay Minister of the Lighthouse Chapel, said if preaching would save the country's youth from negative behaviours, then the church must rather be praised.

Other Christians interviewed, however, indicated the need for effective marketing strategies by the club owners to whip up interest in patrons, instead of criticising the churches.

The GTB Board Chairman, Mr Edem Kpodo, said it was important for players in the industry to properly assess their performance and work to improve on it.

Ms Dorothy Ennim of the Kakum Canopy Walkway called for more information centres to inform tourists about the various tourist sites, as well as the development of new sites, to create employment opportunities for the youth in particular.