Marriage: The Tragedy Of Marital Abuse 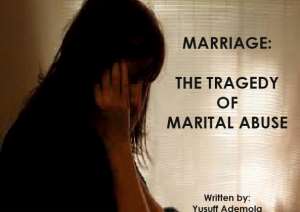 The history of human society is nothing but the description of the evolution and diffusion of various institutions designed toward perpetuation, maintenance and survival of society.

Marriage institution occupies a unique place in the realm of institutions. It is instrumental in perpetuating human society through regulations of conjugal and filial ties. Marriage is as old as the creation of the world. Hence it is no doubt that marriage exists in virtually every known society.

It saddens my heart when married or divorced women speak of what they have gone through in their marital relationship. In consternation, that keeps me wondering if marriage is a “mutual benefit”, as usually deemed. Anyways, my burden was relieved a few days ago when I read a report by a bestseller, Elizabeth Gilbert which goes as such: “Married women are less successful, more depressed, less healthy and more likely to die a violent death than single women.”

She further points out that, while women fare poorly, men actually benefit physically and psychologically from marriage. Although I do not absolutely believe this (as there are more other research studies which report otherwise), having a look at physical and emotional discipline women go through in marriage, one would definitely want to believe in the former. I often ask myself, why do women stay in an abusive relationship for so long before speaking out?

The shocking answer is, because of the dogmatic belief in one's culture or perhaps due to the presence of children. In many societies, it is considered obligatory for a woman to maintain her marriage no matter what the situation – even when she is physically or emotionally abused, in addition to sacrificing her life to the obstreperous, abusive, so-called husband. She has no choice but to accept her fate and serve this piece of crap.

The pitiful part again is that, even in this present civilized age, the misconception is that educated, intelligent women would never stay in such a relationship. However, the reality is otherwise. Sadly, the belief that men are superior to women has been perceived, twisted, and manifested in all the wrong ways; hence such men assertively act on every whim and desire without a second thought. It is even more saddening that men of this nature have been drastically increasing. Sensible and 'real' caretakers are becoming lesser and lesser!

In hindsight, usually there are signs of violence in marriage but many a woman are taught to idealistically believe that the egotistical husband would eventually change. In fact, most women end up rationalizing abusive behaviours, because it is easier to justify being in that relationship than to admit that they are being abused by their own husbands. Similarly, tremendous pressure from the community would persuade women to maintain and remain in an abusive relationship; telling them, “If you were more patient, more loving, more this or more that, the marriage would work out.” But what is the end result? The women develop more psychological problems and lose self-esteem!

It is imperative to mention that no marriage is worth dying for. There is an essential need to increase awareness of this situation. Women should be educated about marital abuse; what is the definition of compromise or lack thereof, and when to speak out and seek help. Divorce should not be a taboo.

It is crucial to keep in mind that, after taking all possible best ways to stop abusive (physical, verbal, or emotional) behaviour or to make one's marriage work out without any positive outcome, divorce can be considered. it becomes a necessity, inevitable, and undoubtedly a healthier option than staying married –especially when staying in that relationship increases psychological distress and jeopardizes overall emotional well-being.

Unfortunately again, it is disappointing that getting a divorce from an oppressive husband is not tantamount to living happily ever after, especially when kids are involved. The women become psychologically disturbed, traumatized from previous experiences, suffer reduced self-esteem and in most cases, have to carry the financial burden to take care of the kids.

Furthermore, if and when these women decide to remarry, they're faced with the harsh if not the despicable reality that most men in our society don't consider divorced women as their first choice for a wife. It is painful for women to know that their ex-husbands have managed to make their lives horrible during and after the abusive marriage. Nevertheless, opting out of the marriage is much more important than staying, and gives way to lead a better life after.

To balance the scale, it is equally important to mention that, while the majority of marital violence victims are women, abuse of men happens far more often than one might expect. Typically, men are physically stronger than women but that does not necessarily make it easier for men to escape the abuse in a marital relationship. Men are often reluctant to report abuse by women because they feel embarrassed or fear they won't be believed, or worse, people assume they were the perpetrators of the abusive environment. Hence, educating husbands about abusive relationships and listening to them as well, should not be neglected.

Conclusively, I hope that through education and awareness activities, gentlemen and ladies of this generation will know how to recognize the warning signs and behavioural patterns involved and be able to avoid the trap of abusive relationships