The Round-Table Of Democratic Practice In Ghana 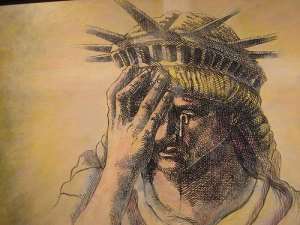 Over the years, political parties who win elections sometimes fail to complete their ideal political intention within the stipulated time of administration. Irrespective, campaigns and elections are always organized after every four years.

Well, how about we ask ourselves some questions, what if choosing another president is not enough? What if majority-rule as often preached has lost its value? Consider the possibility that you didn't get the opportunity to vote in favor of a representative to make your locales' law. Rather, you are the lawmaker? What if everyone got to vote on the speed limit on high way? What if everyone got to vote on the innocence or guilt of a defendant? Imagine a scenario where each and every law that surfaced must cast a ballot by everybody in the general public?

It is surprising how individuals still see Ghana as an outstanding just nation in West Africa sub-district. Ghana is claiming to be democratic meaning free and equal representation of people and the equal right of every person to participate in the system of government often by the majority.. However, the democratic status of the county has been stained with the blame game. This is true because day after day if you tune to your radio or television, you can not only validate the reality but unquestionably attest to the fact. Apparently, we see political parties charging each other for maladministration. This issue can be seen most clearly in the thinking of Jean-jacques Rousseau (1712-781, who said, "Thus deputies of the people are not and cannot be its representatives: they are merely its agents and can make no final decisions. Any law which the people have not ratified in person is null, it is not a law”.

The core contention can be rehashed in various courses: Before African can have political democracy, it must have economic democracy. Ghanaians are more concerned with meeting their economic needs than having abstract political rights. For example, it is estimated that around 3 billion people live on less than $2 a day and 1,3 billion on less than $1 a day. Over 130 million never had the opportunity to go to school and 1.3 billion do not have access to clean drinking water. (United Nation University Study). Sadly, Ghana immovably falls in this classification, thus we are underdeveloped and getting worse. This is because democracy has been touted as a way out of crisis.

The western like democracy is alien and unworkable to Ghanaian society because the necessary preconditions are not present. Widespread poverty, low per capita incomes, a tiny middle class and the absence of a democratic civic culture render such system incongruous with Africa realities. Africans are too dumb to consider appreciating political democracy. In other words, the Ghanaian masses are keen on the politics of the belly and not politics of the people and their political right. The vision I see is not only a movement of direct democracy, of self- and co-determination and non-violence but a movement in which politics means the power to love and the power to feel united on the spaceship Earth- Petra Kelly.

By the way, what is a democracy? Simply put, is it the administration by the general population in which preeminent power is vested in the general population and practiced specifically by them or by their elected agents under a free electoral framework. Abraham Lincoln in his famous often quoted Gettbury address called it “the government of the people and for the people’. Modern day democracy is accepted to have its roots from the way Greek city-states were administered in the fourth and fifth centuries. The Athenian democracy of the fourth century is often cited as the most famous and perhaps perfect example of direct democracy.

Indeed, the architects of democracy must be turning in their graves because democracy in Ghana has become anything but democratic. We have been indoctrinated to believe that democracy is synonymous with freedom! We have also been told that democracy is of the people and by the people. Be that as it may, the question is which kind of people is it referring to?

I would conclude with what the Aristocratic Frenchman Alexis de Tocqueville said; “the health of a democratic society may be measured by the quality of functions performed by private citizens” Ghana claims to be a very small democratic country but does not conform to the true definition of democracy.

I believe something can be done. Thoughts are welcomed.

‘Flouters Of Ban On Public Gatherings Will Be Dealt With’ – ...
59 minutes ago