The National Flags Of World Cuisines 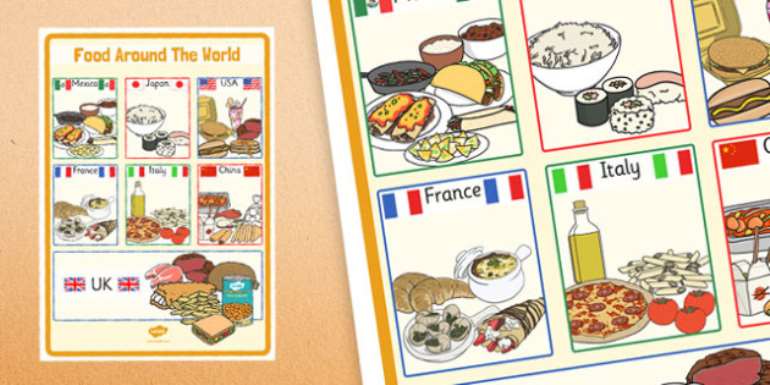 I love food. Yes, but did you know that what is eaten in Ghana is not necessarily eaten in India. That’s how food variety goes. Every country in the world has its own distinctive food or cuisine that differentiates them from other countries. Some foods are however very much common but may be prepared or cooked differently, and one I can actually think of is Rice. Rice is eaten by most nationals and one of the popularly grown dishes. There are so many factors that however influence the overall food choices in the world.

One of the variables impacting the cooking of a specific country is climate. If you live in a chilly or cold atmosphere, you might not want to grow some products of the soil like fruits and vegetables notwithstanding; in spite of a cold climate, food and vegetables are an essential piece of individuals’ diets especially those who live in a warm climate.

Also, a country’s social, cultural and religious beliefs additionally, influence its cuisine. For example, in India, the majority of the people believe in Hinduism and therefore some particular animals are considered sacred. In a more specific term, they regard cows as sacred and they do not eat beef. In the Christian religion, the most significant dietary rule was the traditional prerequisite (in the Roman Catholics and Anglicans) that meat should not be eaten on Friday amid lent.

Foods Around the World
We are going to look at the various cuisines eaten in various countries in the world. Feel free to add your findings and thoughts of food I may not mention.

Africa
Many individuals in Africa might not have a lower expectation for everyday life than other individuals do in the United States. Africans have used foods that are easily accessible and inexpensive to make a unique, distinctive cuisine of their own. In fact, some of the goods in African are similarly eaten. If meat is ever used in African dishes it is typically chicken, goat or cow. In many dishes, meat is totally removed from dishes like beans and Gari or meat can be replaced with salmon in dishes like Mpomtompotom, kontomire stew etc. Vegetables like cabbage, lettuce, water leaves, spinach, ayoyo leaves etc are prominent in most African meals. Most at times, they use spice in making an imaginative mix to give their meal a particular flavor. Flavors, for example, cinnamon, nutmeg, ginger, pepper, garlic, and paprika are frequently used.

England, France, and Germany
Fish sticks and French fries in England make up a prevalent dinner. Their chips are generally browned potatoes like French fries. Another other basic dish is broil meat with Yorkshire pudding. In the afternoons, many people have a snack at "tea" or lunch time. Cones (kind of biscuit) and different cakes might be presented with tea.

French cooks are likewise known for their flavorful, delicious foods, particularly their sauce. They use numerous herbs and curry in their cooking, rosemary, thyme, and basil popular herbs. The French additionally, use a lot of wine in their cooking. Bouillabaisse, a few specialties to fame is their French stew.

German cooking depends vigorously on meat and potatoes. Sauerkraut or cabbage slaw is regularly presented with the potatoes. German is acclaimed for its sausages, particularly strudels.

Japan and China
In Japan, which is an island country, fish is mainstream. Fish soup and rice are commonly served as in "sushi" bite-sized piece of raw fish. Apparently, foods in Japan are cooked directly on the table. In most Chinese dishes, rice and vegetables are most important to meat. Some of the time pork, chicken and meat are eaten. Stir-frying is a famous method for cooking foods in China. Tofu a sort of cheese made of soybeans, alongside meat and poultry is a typical protein source. Bok Choy (Chinese cabbage) is a typical vegetable.

India
Quite a bit of India food is spicy or "hot" compared to African cooking. Less meat is used in most Indian dishes, lentil, beans, and yogurts are regular sources of protein. Rice, dried fruits is grown from the ground and form a piece of many Indian dishes. One unmistakable flavor used in India cooking if curry. Curry is a mix of a few flavors and adjusting the mix yield various types of curry. One mix contains fenugreek, cumin, red pepper, turmeric, and coriander.

Mexico
Mexican dishes are not really hot, despite the fact that Mexicans use a great deal of chile pepper in their cooking. Their Chile peppers range from gentle green chiles to hot and fiery cayenne and Serrano peppers. Foods, for example, tacos, tamales, tostadas are viewed as snack foods in Mexico. At mealtime, Mexicans regularly have meat, fish poultry and stews, for the most part, presented with rice and beans.

Italy, Greece and the Mideast
Italy is known for its pasta. In southern Italy, pasta is generally presented with tomato sauce. A lot of fruits and vegetables are additionally eaten. Individuals in the northern sector of Italy will, in general, eat more meat than those in the southern part. Pasta in the north is frequently presented with white sauce. In Greek, fruits and vegetables are abundant. Greeks olives are very popular here. The most widely recognized meat is sheep. Oregano is a frequently used flavoring. Pita bread, feta, and baklava are other basic foods eaten in Greece.