Yoga’s Africa Roots: Racism On And Off The Mat 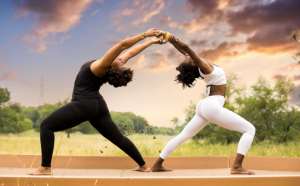 After attending a few yoga seminars and trainings, I discovered Yoga, meaning Unity, its ironically divisive. Not only is there an under represented number of employed Black Yoga instructors but even attending the Yoga training and seminars, there is absolutely no mention of Yoga’s African Roots. Racism is expressed on and off the Mat from the lack of representation when Westerners teach the history of Yoga in their workshops, to the lack of employment opportunities for Black Yoga Instructors and to the lack of Therapeutic studios in underserved communities who need access to Yoga. Even though we all lay on our mats saying, “find your inner peace this and Kumbaya that” or chanting OMs and bowing hands centered, Namaste.

I always walk away feeling the best-kept secrets are still tucked away because once again Westerners have disconnected Africans from another part of their history.

The Ancestors Won’t Rest in Peace, they are the storms from the north, south, west and east who won’t let you sleep, until respect is paid for the foundation they laid.

Westerners have taken other cultures and their history as their own which is plagiarism, wrongful appropriation and cultural annihilation, the highest form of terrorism. Disconnecting the Black Buddha’s and Monks of our ancient history leaves you with only half the equation. Let us shed light on the issues, to illuminate the part many hate to admit to, Yoga has African Roots too.

Yoga (meaning unity) is not just the inclusion of all cultures, it is more than just physical fitness, but it is a mental and inner healing practice, in essence while working to align the body it also aligns the mind encouraging all of the muscles to work together in union to bring fresh oxygen to dormant areas in our nervous system ultimately releasing deeply embedded toxins and bacteria forming diseases. It is an ancient practice; the Dravidians (also known as the blacks-headed people) migrated from northeast Africa into the land of Kush/Ethiopia and later what we now call the Middle Asia where the practice was adopted and possibly restructure by conquering Aryans. Ancient African Buddha’s Priests, Mystics, Monks with dreadlocks and wooly hair coils, wide noses and big lips were all over parts of Africa, Asia, and South America predating some of the fictitious Buddha’s we see today. When I was in school, Buddha was introduced to me as a Fat, Bald Headed Naked Asian however, Buddha’s with indistinguishable African features are found in caves in Indonesia and Cambodia.

Yoga postures and similar philosophies were found in Kemet (Egypt) pyramids. Unique styles of Yoga poses and breathing techniques are found in Africa’s pyramids and ancient text. The Sphinx Posture is obviously inspired by African roots considering the Sphinx can only be found in Africa protecting the Egyptian Pyramids. The Yoruba culture also practice healing the body and building inner power through various movements of the body; this is evident in African Dance, vibrational chants and rituals. What we are now calling Yoga, the Yoruba referred to it as Riro meaning elasticity or Lati (to be elastic) to enhance the body, body modification, and healing. Riri is a Yemoja or the Orish’a form of meditation. These rituals are still performed by tribes like The Gio or Dan people, an ethnic group in north-eastern Liberia and in Côte d'Ivoire who inhabit the Toura Mountains.

Anatomy and healing the body through movement as well as carvings of Yoga like postures are all throughout African Diaspora tribes around the globe. Meditation and seeking the inner power, force or God within us has always been in African Traditions, although once frowned upon and discouraged by Colonists. The question is, if Yoga means Unity, and color doesn’t Matter, why has so much effort been made to alienate Africa’s connection to Yoga and what Africans had already been teaching about the body’s ability to heal itself using this practice?

Before technology, Yoga was used to aid in curing the body of diseases by focusing on our own inner power and cleaning dis-ease from the body.

Ancient text and bible translations speak of a wonderful healer named Jesus, Yahushua, or Iesus, who left us with a message that we will also be healers and do greater works than he. Our great Ancestor Imhotep left us prescribed treatments to healing ourselves with prayers and chants, and “magic” his work was later auctioned and reproduced in the Edwin Smith Papyrus. Movement and Yoga asanas improve blow flow, provides more oxygen to the brain, reverses incorrect breathing encourages endurance and appropriate use of the breath which is your life force. Each posture focuses parts of the nervous system connected our spine connected to our organs. All of the twisting, bending, breathing, and movement is like being your own Chiropractor. We are energetic beings, the same way a mechanical compression machine provides electric currents to resuscitates the heart, Yoga uses our own inner energy as a natural preventative measure or cure for blood clots, helps with proper breathing and blood circulation, high blood pressure, menstrual cramps, constipation and other digestive issues. So why is it not being more encouraged in African Communities?

Please support www.ourrootsproject.com to help us encourage natural healing for underserved communities. Your donation for Yoga’s African Roots Calendar, Yoga Mat and/or Meditation Pillow or Joining our 21 Days to Power Virtual Course will help us reach our goal of $10,000 to purchase additional land and materials to create Therapeutic Healing Spaces and Cultural Preservation in Ghana, West Africa.

Erakah Joseph (joined with her 9-year-old daughter who is also a Yoga Enthusiast) is a former Military Police Officer who shares Yoga with First Responders and Trauma Survivors. She has shared Yoga around the Globe and is a Life Coach through her Work-life Balance and 21 Days Journey to Power online and face to face programs. Erakah currently teaches Yoga alongside her life partner Mr Mawuli “Odehebi” Gomado at Palace Africa in Oyarifa. Mawuli Carries on a 30-year legacy of the Odehe Cultural Arts Center in Teshie, he has incorporated Traditional African Cultural Drum and Dance into his Community Fitness Train to serve the community of Teshie.

Latest Photo Reports
Catch up with all the political quotes from our politicians.
Advertise here
More Health & Fitness
ModernGhana Links
Diet & Nutrition plan for a Head and Neck Cancer Patient
Passive smoking is an active and acute problem
Calcium Deposits in Coronary Arteries Early Sign of Heart Trouble — NURA Doctors
How to have glowing skin during this winter
A Guide to Manage Winter Allergies and Asthma
Cancer: A preventable disease that requires major lifestyle changes
Everything you need to know about Lymphoma
Replace maida with these 8 healthier alternatives this holiday season
Is One Health approach the gateway towards pandemic preparedness?
TOP STORIES

A/R: Woman battling for her life after being knocked down by...
10 minutes ago

We will work with teacher unions to ensure 2022 academy cale...
10 minutes ago