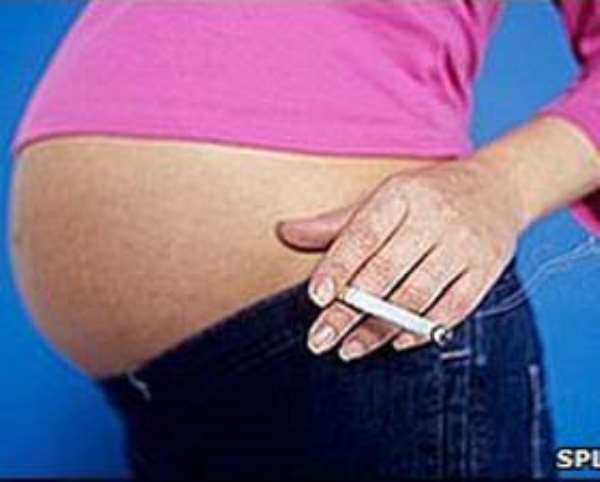 Smoke exposure during pregnancy damages a baby's blood pressure control, which may explain why such babies' risk of cot death is higher, say experts.

Maternal smoking remains one of the biggest risk factors for cot death.

A team at Sweden's Karolinksa Institute found smoke-exposed babies had abnormal surges in blood pressure, even when sleeping undisturbed in their cots.

These surges put extra demand on the heart, making it pump faster and harder, the journal Hypertension says.

The study suggests damage to the circulation may be a factor in sudden infant death syndrome (SIDS), although it set out to look at the effects of smoking on the newborn rather than cot death per se.

Dr Gary Cohen and his team studied 36 newborn babies - 17 of whom had mothers who smoked during the pregnancy.

When they examined the babies they found the ones that had been exposed to cigarette smoke showed abnormal heart rate and blood pressure responses.

And these abnormal responses got worse throughout their first year of life.

Dramatically different
At one week of age the smoke-exposed babies showed abnormally large blood pressure rises as they were lifted up from lying down.

By the age of one, the same babies appeared to have adapted to this and now showed abnormally low blood pressure responses to the same posture change.

Usually, when a person stands the heart rate increases and the blood vessels tighten, raising blood pressure slightly, to keep up the blood flow to the heart and brain.

Dr Cohen said: "Babies of smokers have evidence of persistent problems in blood pressure regulation that start at birth and get worse over time.

"This study reveals for the first time that early life exposure to tobacco can lead to long-lasting reprogramming of the infant blood pressure control mechanism."

He said this might explain why babies of women who smoke are at increased risk of cot death.

"We have known for some time that there is a cardiovascular element to sudden infant death.

"It's not just breathing, but blood pressure control and heart rate control.

"This is another piece of the jigsaw."
He plans to continue to study the babies as they grow up to see if the damage is lasting and whether it leads to problems, such as high blood pressure, in later life.

Professor George Haycock, scientific adviser for the Foundation for the Study of Infant Deaths (FSID), said: "The hypothesis presented here is highly plausible and agrees with work from other research groups.

"FSID's top piece of advice remains, cut smoking in pregnancy - fathers too, and don't let anyone smoke in the same room as your baby."

Experts say a third of cot deaths could be avoided if mothers-to-be did not smoke.

Janet Fyle, Professional Policy Advisor at the Royal College of Midwives, said: "These findings support what we know; that smoking during pregnancy can harm the developing foetus.

"The RCM would urge pregnant women who smoke to seek advice and support from their midwife about stopping smoking, for the benefit of their own long-term health.

"This would also benefit the health of their child."