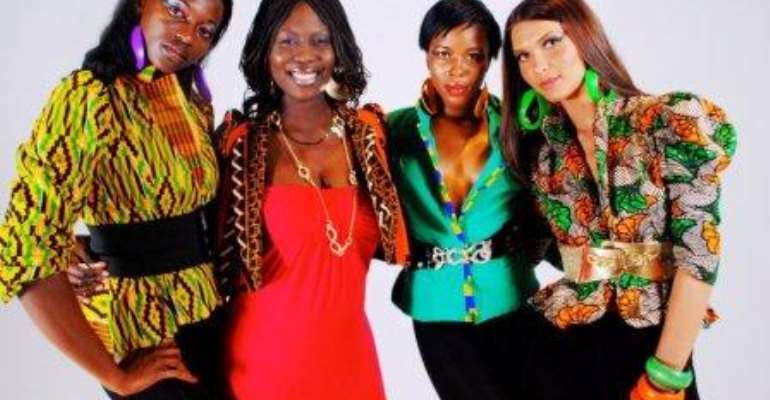 Young talented budding fashion designer, Kayda Nana Afriyie Frimpong is gradually making her KNAF Couture clothing line a household name in Ghana and eventually across the continent. As a graduate of the International Academy of Design, with a bachelor's degree in Fashion Design Afriyie's highly stylish, custom-made and original clothes are designed to accentuate the female figure; and to compliment the male build or to make them look twice at any woman wearing the signature piece.

Afriyie is a complete fashion talent; she sketches, drapes, makes her own patterns and sews. She derives much of her inspiration from Ghana's rich culture and abundant textiles. With her experience as an intern for Anna Sui, as well as her participation in the designer's showing at New York Fashion week Afriyie is certainly poised for greatness in the fashion world.

Though her company is still up and coming, KNAF Couture has garnered a large following and has been notably featured in numerous runway shows across the United States. These include the No Limit Fashion Show in Florida as well the DC Fashion Week in both '06 and '07. What's more, KNAF Couture was the featured designer at the World Bank Group, Fair Trade Fashion Show in Washington DC, in addition to the Ghana 50th Anniversary Tribute Fashion Display at the Ghanaian Embassy. Her collections have been showcased through various media outlets such as; The ABC evening news, the Tampa Tribune, Washington Post, The Express and the New Ghanaian to name a few.

Afriyie recently relocated the company's home base from the United States to Ghana and within that short period she has managed to turn heads among Ghana's fashionistas. KNAF Couture dressed all contestants of Miss Ghana 2009 pageant for photo shoots and public appearances prior to the event and also dressed half of the contestants for the main event. The award for best gown that night was tied between two KNAF Couture gowns. KNAF Couture also featured in a number of Canoe Magazine fashion fairs since moving back home. Among some of her clients are youngn chic personalities such as Jane 'Efyah' Awindor, Ama K Abebrese and Lydia Forson.

Apart from a knack for cuts and stitches, philanthropy is a major driving force in Afriyie's life. She is extremely passionate about aiding the needy and underprivileged in her beloved continent, especially uneducated and unemployed women as well as orphans and children in general. It's her ultimate goal to give back substantially through the philanthropic efforts of her foundation, The Gye Nyame Foundation. A percentage of all KNAF COUTURE merchandise sales go to the foundation for charitable endeavours.