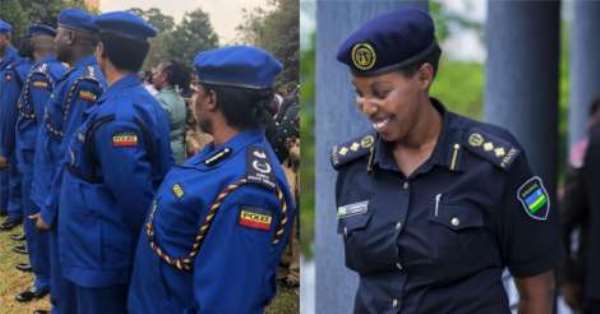 These officers will conduct their operations in the new all Kingston blue uniform and will be under the command of Deputy Inspector General.

"We want to have better visibility of the officers by introducing the new uniforms," he said.

'All police wards posts and out-posts formerly under the administration police service shall fall under the General Duty police. Those who thought that AP cannot take you to court you will see it take effect,' he said.

"These reforms are aimed at making the police a service that is respected rather than a force that is feared," he added.

The new police uniform however, didn't impress a large section of Kenyans who labeled them ugly, dull, old fashioned and uninspiring, some going even as far as labeling it a cheap imitation of the Chinese national police uniform.

For the better part of the day Twitter was lit with Kenyans criticizing the new uniform under #PoliceReforms.

Business Insider SSA takes a look at police uniforms in East Africa and examines just how they compare with the Kenya's new general unit police uniform.


Rwanda police officers dress in a dark blue uniform and honestly they look beautiful in them.


There is nothing to write about Tanzania's police officers uniform apart from they would look good if they were forest rangers instead.


Kenya's new police uniform might be dull and ugly but it doesn't compare with Uganda's.

Uganda police are dressed in a single beige uniform from head to toe, and look like a ragtag under-equipped colonial force the British forgot to dismantle.


Kenya might have looked towards Burundi while picking up the new police uniform because they do share some uncanny resemblance.


Ethiopia Federal Police officers dress in a grey with light blue spots military like fatigue which they have learned to own and now look like action heroes.

Ethiopia Federal Police officers (leadership.)
Latest Photo Reports
Catch up with all the political quotes from our politicians.
Advertise here
More Lifestyle
ModernGhana Links
Taking up Exercise or Sports Immediately after Covid Recovery can be Dangerous for Health
Post-Covid fatigue - Simple ways to deal with it
What is life?
Overhydration – What are the risks and why you must avoid it?
Check your oximeter’s fitness
Healthy eating - Food to eat during Covid-19 times
Societal perception of single-use of anklet
Angela Kyerematen-Jimoh: Supporting women who fuel Africa’s future
A Perfectionist's Plight
TOP STORIES