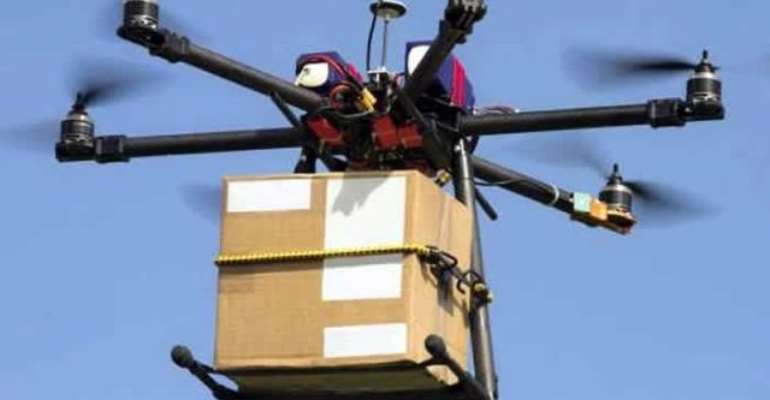 To ensure successful implementation of the Universal Access to Health Care (UHAC) and end AIDS by 2030 using technology and innovation, the government of Ghana will in October introduce drones in transporting essential medicines to inaccessible areas.

The drones, which would be used in conveying essential medicines like epidemic and viral load samples and most importantly, blood would make Ghana the second in Africa after Rwanda to use drones to deliver blood and other needed supplies to rural villages in Ghana

Dr Anthony Nsiah-Asare, Director General of the Ghana Health Service made this known in an interview with the Ghana News Agency after he had participated in a panel discussion session as part of the on the on-going 22nd International AIDS Conference at the RAI Convention Centre in Amsterdam, Netherlands.

The session was on the theme: “Ending AIDS Epidemic and Achieving Universal Health Coverage by 2030 in Africa”.

The five-day conference on the theme: “Breaking Barriers, Building Bridges', is being attended by about 18,000 participants from around the globe including; researchers from various disciplines, medical professionals, public health and community practitioners and policy planners.

The AIDS 2018 conference, aims at promoting human rights based and evidence-informed HIV responses designed to meet the needs of the vulnerable communities, including; Persons Living with HIV, displaced populations, men who have sex with men, people in closed settings, people who use drugs, sex workers, transgender people, women and girls and young people to collaborate in fighting the disease beyond country borders.

He said the team from Zipline followed up to Ghana and a Memorandum of Understanding was signed with them, adding that, the service agreement had been made and approved by cabinet, which was currently going through the system to the National Procurement Authority.

He noted that Zipline would bring the materials and build the equipment in Ghana, adding, “that will also create jobs to our citizens since they will employ procurement, specialists, laboratory technicians and IT specialists and engineers.”

He said the second phase would be having one in every region. It will fly a maximum one hour to drop commodities and come back. The drone will carry a weight of 1.5 to 2 kilos to serve hard to reach areas as well as CHPS compounds.

The Ghana Post he explained, would also be using the drones to drop their Expedited Mail Services (EMS) to their various destinations.

Dr Nisah-Asare said a committee had been formed with the Ghana Civil Aviation who have visited Rwanda to see where the drones would be flying.

“Our idea will be bigger than that of Rwanda since theirs is only for the transportation of blood but we are extending it to include; other epidemic samples and viral load samples to save lives by preventing such essential medicines to be driven on the rough roads for hours and days to long distances.”

The use of drones, to be used in dispatching essential commodities, would be piloted in three zones- southern, middle and northern and would be supplying commodities to regional facilities and districts, which have medical stores for safe storages.

“This he noted, will help cut down wastage in the system, save money as well as save lives since it will take a maximum of one hour in conveying the essential commodities when they are needed, adding, “It will take just small quantity and will go as at when the they are needed.”

What are 'Blue Kiosks' doing at lorry stations if not carele...
18 minutes ago

Asiedu Nketia, Jean Mensa, others to be cross-examined in Te...
18 minutes ago