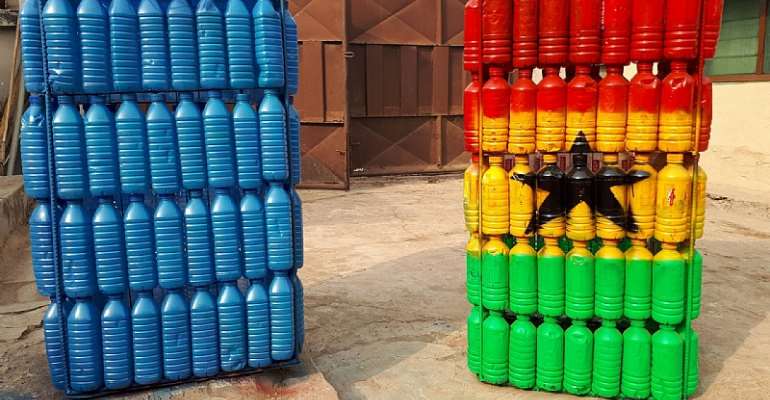 Poor sanitation has been a hot topic for many Ghanaians on and off social media for some time now.

Our sanitation issue as a nation has never been the best but has assumed worrying dimensions lately with the sanitation minister’s job on the line.

As we look up to the government to tackle the issue at a national level, we as a people have a role to play to get our escalating sanitation condition under control.

For one young Ghanaian, Makafui Awuku, turning discarded plastic bottles into viable items is one sure way to curb the plastic waste menace while ridding the environment of filth.

Working under his green startup-Mckingtorch Creatives, Awuku gathers discarded plastic bottles and transform them into dustbins. This initiative goes a long way to keep plastics out of gutters making them into useful materials for the community.

“I started in December last year when I created a Christmas Tree with 396 pieces of bottles and installed it on a major street in Madina, Accra and organized a Christmas event around it,” Awuku said in an interview with modernghana.com

“The project seeks to keep a million bottles from the environment for starters at the end of 2018.

We will need land, equipment, bottles, and funding to make this big enough to benefit the country,” he added.

With a specialty in playing with plastic bottles, he will be facilitating the creation of artworks with sachet bags with plans of extension into glass bottles as the initiative advances.

Makafui is also poet and has a page on Facebook called Mckingtorch.

This is not the only initiative involving plastic bottles, last year, huffingtonpost.com reported about a man who is building homes at a refugee camp in Algeria with plastic bottles filled with sand.

Ghanaweb in the same year published an article about a Ghanaian man, Paul Coffie Bebobru, who builds houses with bottles.