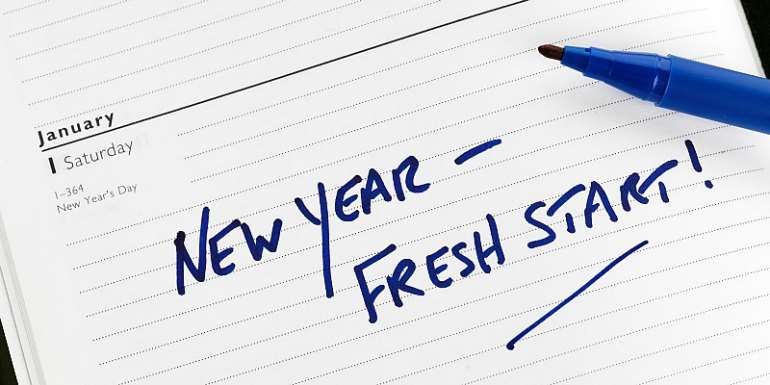 Happy new year! Wishing you all the goodness that life has to offer. A prosperous and successful year is what 2018 will bring. The age old cliche of ‘’New year, new me’’ seems to have gradually metamorphosed into a statement that actually sounds like ‘’new year, same old’’. Actions speak louder than words they say, but often we make new year resolutions with the hope of achieving them before the end of the year. Fast forward a few weeks or months and these resolutions vanish like the harmattan winds they came with. Why can’t we make resolutions and stick to them? Why is it so hard to fulfil even 2 or 3 items on our checklists? Is it a case of being overly ambitious or we are just too engulfed in old habits that we find it quite impossible to change? These and many more are the questions we should ask ourselves. If 2018 would be different, then we have to make realistic resolutions, discipline ourselves to stick with them and ensure that at the end of the year, we would have achieved at least 70% of them. There are some very popular new year’s resolutions that we often hear yet no one ever sticks to. Jumia Travel, Africa’s leading online travel website examines some popular new year’s resolutions that people never stick to.

Spend less/Save more - January !!! The first month of the new year and the beginning of everything. For most salaried workers, this is the longest month of the year as the gap between the December salary and that January salary is often endless. Due to this unfortunate phenomenon, many people often make a certain resolution in the new year; to spend less and save more! Easier said than done right? With the new year comes many plans and heavy expenditure. Although the resolution often says spend less, we end up spending more especially during festivities and on special occasions. Arguably, some of the spendings are out of our hands but when we can, we should try and save a lot. This resolution, no matter how difficult it is to stick with is one of the most important. The ability to effectively achieve this makes us have an amazing year.

Lose or gain weight - After savings comes health. This is by far the second most popular new year resolution on many people’s checklists. The keywords here are ‘’gain’’ and’’lose’’ with the latter the more frequently used. After the holidays, many people end up gaining a few more pounds. Hardly would you see a bulky person lose weight after Christmas. In the new year, many people have a checklist that indicates they want to lose a certain amount of pounds. At the end of the year, many of them are either still the same size or even a couple of pounds heavier. Funny how these people spend many hours in the gym yet come back to eat the same meals that caused the weight gain. The other side of the coin also has the select few who want to gain weight. One man’s meat they say is another’s poison. When one party is dying to lose weight, the other will do anything to gain it. The weight gain group will also eat almost everything that comes their way but will not have enough rest and often will expend all the energy derived from the food they eat. In the end, December comes and this resolution is hardly achieved.

Focus more on one’s self - Have you ever heard people say that ‘’this year is all about me’’ or ‘’it’s time to do me’’? Yes, most of you say it. Not to say it’s a bad thing to do this but have you ever weighed the advantages and disadvantages of this? Focusing more on yourself shouldn’t mean cutting everyone else out of your life. This life is not an island and you cannot live alone. However, you can concentrate more on improving yourself while you limit the indulgence of others in your life. In an attempt to balance this, many people end up losing valuable family and friends or even end up becoming lonely. Depression ca set in when you have no one to talk to or even fall on in times of need. When we encounter such situations in the early parts of the year, many of us lose hope and revert to our old ways! Where did the resolution go?

Latest Photo Reports
Catch up with all the political quotes from our politicians.
Advertise here
More Lifestyle
ModernGhana Links
Taking up Exercise or Sports Immediately after Covid Recovery can be Dangerous for Health
Post-Covid fatigue - Simple ways to deal with it
What is life?
Overhydration – What are the risks and why you must avoid it?
Check your oximeter’s fitness
Healthy eating - Food to eat during Covid-19 times
Societal perception of single-use of anklet
Angela Kyerematen-Jimoh: Supporting women who fuel Africa’s future
A Perfectionist's Plight
TOP STORIES