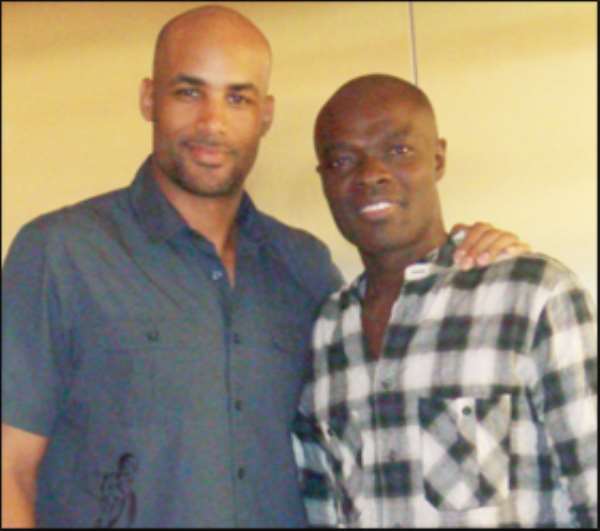 DESPITE HIS promise to return for next year's edition of the Exopa Fashion Weekend, indications are that the Hollywood superstar with Ghanaian lineage, Boris Kodjoe, may be going back on word.

Boris was in Ghana last July as part of the Exopa fashion weekend activities to launch his Ziami clothing line. He however could not as reports revealed he was not able to convey his designs down to Accra on time.

He then told both local and international media, who covered the world class event, that he would be coming back to Ghana for next year's event to launch his designs then.

According to the CEO of Exopa, Sima Ibrahim, Boris has shown an interest in returning this December for Exopa's impending L-Fashion night.

“He will be coming back with his clothing line in December for the L-Fashion Week and I will be going to see him next month.

When I come back, I will come with information about what he is bringing so that we will know what to do”, he told BEATWAVES in a short conversation.

Sima said this year's edition of the L-Fashion event, which is being organized to promote and encourage plump models, would be bigger than last year's maiden event.

The event, he indicated, is not only expected to attract designers but a lot of exciting renditions from music stars VIP, Kwaw Kese, Sarkodie and others.

As part of the programme line-up, he said, students of the Exopa Modeling School would use the occasion to show off what they have learnt, as plump size models also strut their stuff on the runway alongside the average models. Auditions for the show, he noted, would take off September.

“December is going to be hot and Exopa is not going to disappoint anybody. If you come to our show, you will not regret it”, he added.