Why Some Women Grow Beard 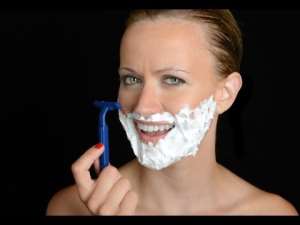 For most women, some hair loss from the scalp along with more body hair are just regular signs of ageing . In some cases, though, these changes may stem from a little-known condition that sends testosterone levels soaring.

Writing in the Oct. 22 New England Journal of Medicine, doctors describe just such a case: A 57-year-old woman who came to them with body-hair growth, balding, an increasingly male-sounding voice, and other signs of excessive testosterone levels .

After ruling out some of the usual suspects including tumors of the adrenal glands and ovaries her doctors eventually settled on an obscure diagnosis known as ovarian hyperthecosis.

It's a condition that many doctors may not be aware of. Even endocrinologists specialists in hormonal disorders see relatively few cases come their way, said Dr. Graham McMahon, an endocrinologist who was at Brigham and Women's Hospital in Boston when he co-wrote the case report

Ovarian hyperthecosis arises when certain cells in the ovaries overproduce androgens "male" hormones such as testosterone, the report authors said.

"We don't really know how common it is," said Dr. Margaret Wierman, a spokesperson for the Endocrine Society who was not involved in the case, but has treated and written about ovarian hyperthecosis.

There have been no large studies on the condition, so its prevalence is unclear. In fact, Wierman said, there has been little research of any kind beyond case reports.

As with hyperthecosis, PCOS involves an overproduction of androgens in the ovaries. The symptoms include irregular menstrual periods and fertility problems, acne and weight gain.

One theory, Wierman explained, is that ovarian hyperthecosis could be a more-severe form of PCOS.

"Some women who develop ovarian hyperthecosis after menopause might have had milder PCOS that was never caught maybe because it was just causing irregular periods," Wierman said.

But after menopause, when estrogen levels drop, those women could see worsening problems related to their high androgen concentrations.

That, however, remains only a theory.
The patient in the current case was a 57-year-old woman who'd visited an outpatient clinic after several years of bothersome body changes. She'd been noticing facial hair growth for the past three years; then other, more "prominent" symptoms had cropped up in the previous year including a deepening voice, hair growth on her abdomen, balding on the crown of her head, and an increased libido.

Lab tests showed she had high testosterone levels, but normal levels of a hormone called DHEAS, which is released by the adrenal glands.

If a tumor in the adrenal gland had been the cause of the woman's symptoms, her DHEAS levels would have been high, Wierman said.

After more tests including CT and ultrasound scans produced no clear diagnosis, she ended up at Massachusetts General Hospital for further evaluation, according to the case report.

Ultimately, the woman was diagnosed with ovarian hyperthecosis and underwent surgical removal of both ovaries a standard treatment for women who are past their childbearing years.

Three months later, her testosterone levels had plummeted. (Because removing her ovaries also sent her estrogen to undetectable levels, she developed severe hot flashes and needed hormone therapy, in the form of estrogen patches.)

There was only a mild improvement in her balding, and no change in body hair so she ultimately turned to medication for her hair loss, and electrolysis (a type of permanent hair removal) for the body hair, the report said.

"Some of the effects of ovarian hyperthecosis tend to be persistent, like facial hair," said McMahon, who is currently president of the Accreditation Council for Continuing Medical Education, in Chicago.

However, he said, removing the source of the excess testosterone often improves the "metabolic abnormalities" commonly seen in ovarian hyperthecosis. Those include high blood pressure and diabetes.

McMahon stressed that women should not be "alarmed" by changes that can come with menopause including thinning hair on the scalp, some body-hair growth, and weight gain around the middle.

"Those changes are very common among postmenopausal women," he said. "And only a small fraction will have a medical condition underlying it."

But if the changes come on "rapidly" or severely, that is a red flag, according to McMahon. And any time a woman feels concerned about signs or symptoms that arise after menopause, she should feel free to talk to her doctor, he said.