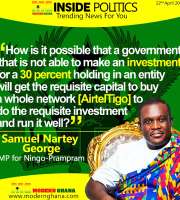 Ghana was the first African country to gain independence in 1957. Its constitution makes provision for traditional leaders like the King of the ancient Ashanti tribe. Producer Jan Lampen and presenter Manu Padaychee explored the myths and rituals of the Ashanti.

A drum-roll is the ancient call of the Ashanti Kingdom. The voice of a proud nation. For centuries, the drums have called warriors to war. Echoing through the forests of West Africa, they have announced the arrival of kings and mourned the death of Queens. Today, the drums are still beating, but some say they are now talking of changing times.

While the current King of the Ashanti, Otumfuo Opoku Ware the second, still occupies the Royal Courts the elders are already casting their eyes on a possible heir. And in the corridors of power candidates are preparing for the battle of the stool. The Ashanti stool is a symbol of power and status. Every Chief has one. But there is only one stool that is cast in solid gold.

This is the Golden Stool
This is a replica of the stool. Not many people have seen the

original and only the King and his most trusted advisers know where it is hidden. As Ashanti legend has it, around 300 years ago one of their wisest and greatest priests called together the Ashanti in a effort to unite the nation. He commanded from the sky a symbol that would unite them. Amid thunder and darkness there descended from the sky the golden stool which floated down and landed on the lap of the priest. That stool represents to this day the very essence of Ashanti unity.
In search of the Golden Stool, we find ourselves in Ghana. A 200km road connects Accra with Kumasi, the capital of the Ashanti nation.

The roads into the interior of the country are all that remain of the fifteenth century colonial invasion. From Europe they came in shiploads looking for gold. And in this Ashanti region they found it. In fact, so many golden artefacts were exported that by the seventeenth century, the European currency had become gold-based.

This is the palace of the Ashanti King Otumfuo. From here he rules over a third of Ghana’s population of 17 million people. Somewhere in the maze of passages in the palace rests the soul of Ashanti nationhood - the golden stool. Because of his ailing health, the King could not grant us an interview. But his son, the Prince Nana Akyempe-hene agreed to lift the veil on Ashanti culture. If only ever so slightly...

PRINCE AKYEMPE-HENE: EVERYTHING THAT IS REASURED IS HIDDEN IN A SECRET PLACE... WE'VE PROTECTED THE STOOL BY PUTTING IT IN A VERY SECURE PLACE WHICH PERHAPS IS ONLY KNOWN TO THE KING AND A FEW ATTENDANTS. IT IS RARELY SEEN. BEING OF GOLD, IT IS APPEALING TO EVERYONE AND WHO KNOWS, IF IT IS BROUGHT OUT EVERY DAY A CRIMINAL MAY ONE DAY POUNCE ON IT AND TAKE IT AWAY.

Carried on the shoulders of a royal bearer, the golden stool has never touched the ground. It is considered so sacred that no-one has ever sat on it. On rare festive occasions, it is placed on an elephant skin next to the King. On more than one occasion, the Golden Stool has been the cause of full-scale war. The 1873 Ashanti-British war was particularly brutal. It is believed that Ashanti warriors decapitated their enemies and made effigies of their heads which now adorn the stool. It is no wonder then, that the British demanded to be given this seat of power when they finally crushed the Ashanti Army at the turn of the century.

Alongside the traditional chiefs, Great Britain continued to rule the Gold Coast Colony until 1957 when Ghana gained its independence. Despite the fact that the British never got their hands on the golden stool, they did have a major impact on the Ashanti culture.

Prince Akyempe-hene for instance, completed his law degree in London and subsequently helped the central government of Ghana to implement a Western-style democracy. Whether it works for Ghana is an open debate. But for now, the Prince has swapped his lawyer's robe for traditional Kente cloth and he has returned to claim his chieftancy and his stool.

The role of traditional leaders is entrenched in Ghana's Constitution. In return, the Prince and all the paramount chiefs have had to cede political power to the central government. Some would argue that this trade-off undermines the Ashanti's traditional value systems. Prince Akyempe-hene does believe that the increased interaction between traditional Ashanti culture and the west has lead to a dilution of tradition, but culture is a dynamic thing he says and he feels confident that they are doing their best to preserve the core of Ashanti culture.

According to the Prince, Ashanti culture is rooted in a system of extended families. In fact, most of the cases brought to his council involve family matters. With a linguist sitting on his right, he listens to both sides of an argument and then tries to mediate a compromise. If there is a case of serious wrongdoing, punishment or a fine can be meted out. The most serious cases are referred to the King.

Nana Akyempe-hene will never be King because the golden stool is passed down matri-lineally. Several nephews on his mother’s side of the family are currently jostling for the position. In the meantime, the King is hardly seen in his traditional council and has cut down on public duties. The Prince now finds himself with a double work-load. He never expected to come back to his traditional roots, but once his father asked him to come back, he really had no choice. Prince Akyempe-hene has completed the circle. As a young boy in the King's courtroom, he learned the Ashanti ways. But it was the British that moulded his character and introduced him to European culture. In a strange twist of fate, his story is the mirror image of another tale.

Thirty-six years ago a young school teacher named Alan Cole left England and came to Ghana. He is still here. Today he is known as Nana Osei Bediako Firaw and is the only white chief of the Ashanti nation. It is a position that does not sit too well with his family back in the U.K.

ALAN: THEY THINK I’M SORT OF LOOSE UP HERE, BUT I’M ENJOYING MYSELF... I HAVEN’T DIED YET. I’VE PUT ON CONSIDERABLE WIEIGHT IF ANYTHING, SO I DON’T THINK THEY NEED TO WORRY.

For almost thirty years Alan taught geography, mathematics and English. His contribution to the people of Kumawu was finally rewarded when they presented him with a stool - making him a full Ashanti Chief. Married to a local Ashanti woman and with two children, Alan has more than assimilated the Ashanti culture. He is a complete convert. Without an Ashanti family tree of his own, Nana Alan did not have his own traditional stool to claim. One had to be made. Carved from solid wood, it is believed that whoever sits on it, surrenders his soul to the stool.

A 100 years ago, the funeral of an Ashanti King was a traumatic experience. He was buried with a live entourage. Fortunately, this custom as been abandoned. But the ritual of blackening the stool, Alan tells us, still takes place. An animal is slaughtered and blood mixed with dark fat is used to blacken the stool of the deceased before it is placed in a secret stool room where no-one is allowed except for the official stool guardian.

Alan Cole... or Nana Osei Bediako Firaw, as he now prefers to be called, has only been back to the UK once, in 1967. He did not like what he saw. He does not even have a British passport anymore and on his meagre Chief’s salary, he does not foresee any extensive travelling. Ghana is not a bad place, he says, and if he was given the same choice again, he would follow the way of the stool.

Perhaps in every tale there is something lost and something gained. Prince Akyempe-hene has lost his army of mighty Ashanti Warriors, but he gained a far more powerful weapon. Peace.

WE ARE ASHANTIS WITHIN GHANA, THEREFORE OUR FUTURE OUR PROSPERITY IS LINKED TO THAT OF ALL THE OTHER TRIBES IN GHANA. WE STAND FOR OUR TRADITIONAL VALUES, VALUES OF FAIRNESS, RESPECT, HONESTY, INTEGRITY AND OF EACH BEING OUR BROTHER’S KEEPER.
The Prince believes that western values have caused the break-up of Africa’s extended family system. It is time to unearth the mythology and legends of the past, he says. It is time for Africa to heal herself.

As A symbol of nationhood, and because if contains the sumsum or Soul of Ashanti (Asante), the Golden Stool is considered to be so sacred that no person whatsoever is allowed to sit upon it. It is kept with the strictest security and precaution; and is taken outside only on exceptionally grand occasions. Never must it come in contact with the earth or the ground.

It is always lying on its own stool or on the skin of an animal such as the leopard. Ashantis have on many occasion made great sacrifices to defend it when its safety had been threatened. In 1896 they submitted to the deportation of their King, Prempeh I, rather than resort to a war in which they feared they might suffer defeat and risk the loss of the Golden stool. They deemed the loss of their King a small thing compared with the loss of their Golden Stool.

Two other incidents show how much importance the Ashantis attach to the Golden Stool. In March 1900, the governor of the Gold Coast, Sir Frederick Hodgson went to Kumasi to demand the surrender of the stool. "Where is the Golden Stool", he asked "Why am I not siting on the Golden Stool at this moment?.. Why did you not take the opportunity of my coming to Kumasi to bring the Golden Stool, to give it to me to sit upon..?" This was a tactless and terrible mistake arising out of complete ignorance of the symbolism of the stool. the Golden Stool was not a kingly throne, but the resting-place of the nation's soul. The speech was heard in silence. When the assembly broke up, every man went home and prepared for war. Three days later, war broke out between the Ashantis and the British in which the Ashantis were finally subdued. the Ashantis, Ashanti and British War 1900 however, claimed victory because they fought only to preserve the Golden Stool; and this they achieved.

The second event took place twenty years afterwards. a group of African road-builders accidentally came across the hiding place of the Golden Stool. They robbed it of its gold ornaments. The whole of Ashanti was thrown into alarm, and people put on their mourning cloths. the British officials, realising the seriousness of the situation, took a very wise course of action the culprits were arrested and the Kumasi Council of chiefs permitted to try them according to traditional custom. The verdict was a foregone conclusion. The Council considered the crime a serious one and therefore imposed the death penalty. Bit the British later commuted the sentence to perpetual banishment.

The Ashantis have always been proud of the uniqueness of the Golden Stool when the king of Gyaman, called Adinkra, made a golden stool for himself, the Asantehene was so annoyed that he led an army against Gyaman. Adinkra was totally defeated near Bontuku, and his head cut off. The Asantehene then ordered that Adinkra's golden stool should be melted down and cast into two masks, to represent Adinkra's face. These masks were hung one on each side of the Ashanti Golden Stool.