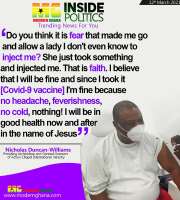 Culture of the Ashanti People

In Ashanti, as in much of Ghana, the village is a social as well as an economic heart of society. Everyone is expected to participate in the major ceremonies. The most popular ceremonies are funeral celebrations which typically last several days. The extended family - no matter where they live - will travel home to attend a funeral. The entire village/town and the inhabitants of its environs will also come to pay their last respects. Thus, the funeral expenses can be a huge burden on the family. Having gathered family and friends from far and wide, many often take the opportunity to conduct business or land transactions at funerals.

In each village there are people of particular importance. The

Chief together with the Elders maintains traditional customs and ceremonies and deals with disputes. The traditional priest and the herbalist provide a medical service which can be partly paid for in local produce (a hen, eggs etc.) as opposed to Western medicine which requires cash payment, and usually a considerable journey to the nearest hospital. The priest, when possessed by the gods, is particularly powerful at dealing with spiritual problems. The herbalist relies on local medicines to effect a cure. Many of these cures are now being investigated by research institutes both in Ghana and elsewhere as alternative remedies for many ailments, including Malaria. The linguist has no corresponding role in western society. A man wishing to consult the fetish priest or the Chief addresses his remarks to the Linguist, who then passes them on and returns the reply (even though all three people are present together). The linguist is an intermediary, acting as a buffer to reduce the severity of utterances and so save delicate situations. If the Chief should make a harsh pronouncement, it is the duty of the linguist to paraphrase and clothe the statement in proverbs.

As in most developing countries, there is a strong extended family system. Poorer members may seek financial assistance from their better off relatives for school fees, medical expenses etc. But visitors are always welcomed, even if their arrival may be a cause of financial concern. In Asante, the family line is matralineal - in that it passes through the mother to her children. A man is strongly related to his mother's brother but only weakly related to his father's brother. This must be viewed in the context of a polygamous society in which the mother/child bond is likely to be much stronger than the father/child bond. As a result, in inheritance, a man's nephew (sister's son) will have priority over his own son. Uncle-nephew relationships therefore assume a dominant position. (Legislation was introduced in 1984 to change this traditional pattern of inheritance.)

The official language is English but this is not spoken by many villagers. The Asante are part of the Akan tribes who speak various dialects of Twi. The language is very rich in proverbs, the use of which is taken to be a sign of wisdom. Euphemisms are very common, especially about events connected with death. Rather than say "the King has died", one would say "a mighty tree has fallen". Proverbs are often used to express ideas indirectly as can be seen from the following: "Obi mfa ne nsa benkum nkyere n'agya amanfo" - this is literally "Do not point to the ruins of your father's house with your left hand" - which is equivalent to "Do not scorn culture inherited from your forefathers".

There is a universal God (Onyame) but this does not exclude gods associated with a particular region or spirits (obosum) by whom a priest may be possessed. (This lack of exclusiveness makes it possible, say, for a traditional priest to be a Roman Catholic). But there is no doubt of the existence of the Kingdom of the Dead(Samanade) so custom requires that great attention is paid to the proper conduct of burials and funeral celebrations. Death is the one great certainty. Traditional religion does not require regular attendance at particular buildings. Religion is not something that is remembered for one hour a week. The Gods and the spirits of the ancestors are always present.