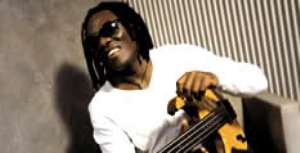 It's not cool to be impressed by the latest whiz kid to hit town. But even the hippest of the hip give it up when the subject turns to Richard Bona, a slight, shy virtuoso of the electric bass guitar from a mud-hut village deep in Cameroon. –Newsweek "Imagine an artist with Jaco Pastorious's virtuosity, George Benson's vocal fluidity, Joao Gilberto's sense of song and harmony, all mixed up with African culture. Ladies and gentlemen, we bring you Richard Bona!"—Los Angeles Times If Richard Bona could create the soundtrack to his dreams, it would sound a lot like his latest self-produced, Grammy® nominated album, Tiki. Unequivocally in line with the aesthetics and spirituality of its three predecessors, Tiki explores every dimension of Bona's exceptional talents, while also displaying a new maturity. Tiki is a paradoxical, two-fold movement, combining introspective clarity with a renewed sense of openness toward the plural nature of today's world.

Bona blends these elements with the simplicity of means and obviousness of expression that characterize his masterpieces. Bona's first three albums -- Scenes from My Life, Reverence and Munia -- allowed listeners to discover a wonderful storyteller, whose spellbinding vocals smoothly wrapped around his unique musical arrangements.

His flowing style blends a horde of influences, including jazz, bossa nova, pop, afro-beat, traditional song and funk. This unique combination has given Bona's music a new dimension, one that is unexplored yet genuinely universal. As Bona puts it, “I play the bass, but I am not just a jazz bass player.”

Bona's fans around the world have their own moniker derived from his unique style, referring to him as “The African 'Sting.' ” On Tiki, Bona surrounds himself with old friends and special guests (including ATN Stadwijk, Vinnie Colauita, Susheela Raman, Djavan, Mike Stern, Gil Goldstein and multiple Grammy-winner John Legend on “Please Don't Stop.”) to create an album with sumptuous arrangements and skillful, polyrhythmic beats. From jazzy ballads (“Esoka Bulu”) to sambas revisited (“Akwa Samba Yaya”), from a dreamlike tribute to Jaco Pastorius (“Three Women”) to an African nursery rhyme (“Ida Bato”), Tiki showcases Bona's breadth of talent and his maturity.

The album moves through multiple cultural influences -- including African, Brazilian and Caribbean -- yet Bona brings these cultural rivers together as if they flow from a common source. On this album, listeners will find Africa, a land of myths and intimacy, both ancestral and ultra-contemporary. They will find the great cultural capitals of our global village, with a soundtrack that borrows as much from jazz as it does from Afro-Cuban rhythms. They will find the precious suavity of Brazil's harmonies, alongside the energy of rap. And, they will find the grooving nonchalance of the Caribbean, alongside the extreme precision of Anglo-Saxon pop. It is this swarming mass of identities that Bona blends so masterfully in his music, without sacrificing any of his style. In fact, his exceptional virtuosity has never seemed so under control, so channeled.

Never have his melodic talents been so sharp, so alive. And, never have his arrangements been so uncluttered, while losing none of their richness and sensuality. From the moment of Bona's birth, music has been the center of his world. The grandson of a famous percussionist and singer, Bona was born in 1967 in Minta, a village in central Cameroon. Perched, Minta lies between the small shrubs of the Savannah and the virgin forest. Beginning with the music his mother and four sisters sang in church every Sunday, Bona gained an early passion for sounds and harmony.

He joined the choir at age 5, and soon Bona's family realized they had a musical prodigy among them. Richard has a highly unusual gift -- he only has to look intently at someone playing, and he can learn the instrument. Not blessed with traditional instruments, Bona found creative ways of making instruments for himself, including reed flutes, a large balafon, wooden percussion instruments and a 12-string guitar. “I hung around the workshops where they repaired bicycles,” Bona recalls, “and as soon as the guys turned their backs, I'd put brake-cables in my pocket for my prototype.” Rehearsing for eight to 12 hours per day, Bona honed his skills.

He performed as a singer and a multi-instrumentalist in a range of religious ceremonies, and soon he became known beyond his village for his musical virtuosity. At age 11, Bona went with his father to Douala, sea-port city with nearly 2 million residents. Bona quickly found his first job, as a guitarist with a dance group. In 1980, the French owner of a local club gave him the task of setting up a small, jazz-inspired group (with soul-jazz and jazz-rock leanings).

Meanwhile, he entrusted Bona with a collection of some 500 vinyl albums. Through these albums, Bona discovered the essence of jazz -- the freedom, complexity and virtuosity of the music invented by the American descendants of his forebears. “That's how I came across the Jaco Pastorius album, the first one, the one with his name on it (Jaco Pastorius, Columbia, 1976), and I never looked back,” Bona says. “When I started listening to it, I wondered for a moment if I'd got the speed wrong -- I thought I was playing it at 45 rpm instead, and I even took a look.

Before Jaco, I'd never thought of playing bass.” Cleary, the influence was strong enough to hold. Years later, Billboard magazine said of Bona, “Richard Bona is the hottest electric bass player since Jaco Pastorius – and the first since that past master with the potential for solo stardom.” In 1989, when Bona was 22, he left Africa for Paris, where he quickly built a solid reputation.

He played with Didier Lockwood, Eric Lelann Marc Fosset and André Ceccarelli, and took part in studio sessions with leading musicians such as Manu Dibango, Salif Keita and Joe Zawinul (My People, 1992.) In 1995, he hooked up with Zawinul again, and he was invited to accompany Zawinul on a world tour. Bona's talents continue to gain notice in the world music community as a solo artist and a session player. The list of musicians who have played with Bona looks like the roster from the musicians' hall of fame. In addition to those already mentioned, Bona has performed with Michael and Randy Brecker, Chaka Khan,Harry Belafonte, Tito Puente, Bob James, Mike Stern, Larry Coryell, Steve Gadd, Joni Mitchell, Harry Connick Jr.,Chucho Valdes Herbie Hancock, Billy Cobham, Queen Latifah, Jacky Terrasson, Bobby McFerrin,David Sandborn,Joe Sample, Chick Corea, and George Benson.

Bona also joined forces with Zawinul again in 1998, when he sang and played bass and percussion on Zawinul's world tour; and last year, when Bona played the same role on Zawinul's album, Faces & Places. In addition, Branford Marsalis recommended Bona to play on the first compact disc by Frank McComb, the singer from the Buckshot Le Fonque group (the funky side of the elder of the Marsalis Brothers).

The album was produced by Columbia, and a few months later, the label gave Richard the chance to create his first album as the leader. Throughout his amazing musical journey, Bona has absorbed the spirit and the rhythms of the places he has visited.

Fortunately for the listener, Bona has the talent to blend these discoveries into a musical masterpiece. Music lovers wishing to discover the world do not need to purchase a plane ticket, surf the Internet, or even watch an international newscast. All they need is a copy of Tiki, and Bona will be their musical tour guide on a visit to the corners of the globe, to explore the people and the soul of many nations.