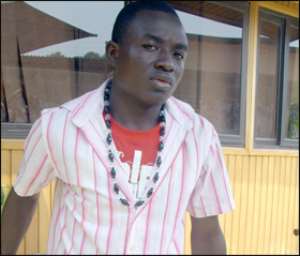 The gang, armed with pistols, attacked him on his way home after attending the finals of the Appeatus Idol competition which was held at Dansoman that day.

Isaac told Beatwaves in an interview that at about 11pm that night, whilst he was on his way home after participating in the finals of Appeatus Idol, he came into contact with three well dressed men.

He said the three men who were nice to him initially, asked questions about the competition and why he was not one of the winners since he performed well.

All along the victim said he did not suspect any foul play until when the armed men demanded to know his identity as to whether he was Isaac Baah.

As soon as he confirmed that he was Isaac Baah, one of the armed men slapped and kicked him from behind.

“I was then asked to sit on the ground after receiving several kicks with a gun pointed at my head. They told me to say my last prayers because they are going to kill me.

“However, one of the armed men asked me to run for my dear life which I obliged, but not after I had received a series of slaps and kicks from them.”

Baah disclosed that for some time now he had on a number of occasions received strange text messages from an anonymous number.

According to him on November 19 last year, he received two different text messages from the anonymous number in which he was threatened with death.

The message, which Beatwaves had the opportunity to read, cautioned Baah to stop exposing the sender who did not disclose his identity, else he was in for a bigger trouble which could cost him his life.