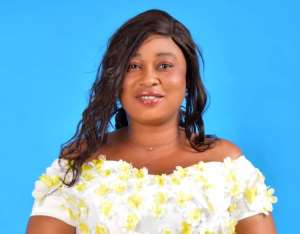 An upcoming gospel musician Miss Mercy Boahene popularly known in the music industry as 'Queen Merss' has said she intends to work hard to become like the popular gospel songstress Diana Hamilton.

She said whenever she listens to the gospel songstress' songs she feels comfortable and aspires to become great like her.

Queen Merss hinted that her love for Diana Hamilton of the "Adom Nti Na Metiase" fame is unlimited to the extent that her songs always give her the inspiration to work hard.

According to the queen who comes from Asante Bekwai in the Ashanti Region, she has currently released six gospel albums to her credit.

Presently staying at Konongo in the Ashanti Region, the young gospel songstress mentioned the albums that she has so far released — 'Ma Na Adwene Daa' is her first gospel album and Nea Ope Na Oyo her second album.

She mentioned the third and fourth debuts as Efata Wo and Wadi Nkonim respectively.

Whilst the fifth and sixth albums were named 'Gye Me So' and 'Fa Wo Gya' respectively.

Being a product of the Bechem Business College in the Ashanti Region, Queen Merss assured her fans to remain resolute and rally behind her since she has something special for them in the future.

She further charged her fans to pray for her as she sings and works hard in her bid to become successful.