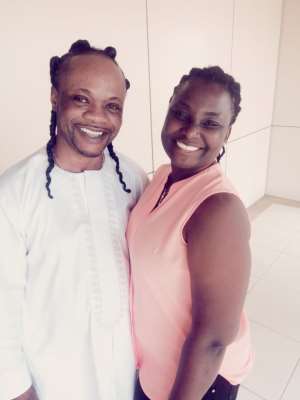 Even though the radio station is still running test transmission, the ecstatic Nana Adjoa Silky who hosts Asempa FM Girlz Girlz show and doubles as a pundit on Adom FM entertainment show was given the opportunity to have a one-on-one interaction with the highly celebrated musician icon.

The Interview was centred on how Daddy Lumba’s Die Hard Fans and fans across the world have displayed unflinching support towards him and the love he received on his birthday.

It was the climax of the celebration of Daddy Lumba’s birthday which was celebrated throughout September and ended in October on DL FM.

Nana Adjoa Silky who doubles as a media team member of the Die Hard Fans of Daddy Lumba went to the radio station purposely to celebrate the Icon where she had the opportunity to be the first to speak on the radio station.

After the interview, the elated presenter expressed fulfilment and said it was a dream come through.