Our colleagues always pull us down, but we keep going because we're focused — Gyakie 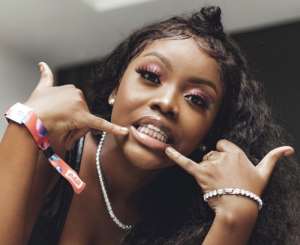 A Ghanaian female musician, born Jackeline Acheampong and better known as Gyakie has lamented the rate at which her industry colleagues get offended by others' success.

According to her, the "pull him down" syndrome has increasingly gained deep roots in almost every sphere of Ghanaian society.

Speaking to Amansan Krakye on Cape Coast-based Kastle FM’s entertainment show, the award-winning celebrated singer intimated that musicians in the country, in particular, should work hard, focus and be determined.

“Yeah as for the pull him down syndrome it is everywhere like in music, movies, even with radio work there are plenty.

“There are colleagues around you who equally wants their colleagues who are rising to fall, so as for that one it is everywhere,” she said.

She continued “sometimes you go on social media and you see someone’s tweet which is negative which will hurt you a bit but at the same time you know your vision and where you want to be.”

Gyakie advised no one to pay attention to negative comments thrown at them.

She urged them to stick to what will lead them to their set goals.

“That’s where I set my mind to do so what everyone is saying about me and my career falling apart is my back case,” Gyakie concluded on the show.