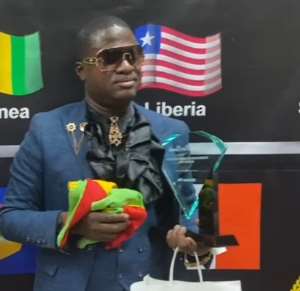 The event which took place on September 24 at Serbian Hall in the city of Edmonton seeks to recognize the achievements of African musicians and musicians from North America.

Minister Ike was the only Ghanaian artist to compete with musicians from other North American countries and African countries like Guinea, Cote d'Ivoire, Nigeria and Sierra Leone.

Speaking to this portal, Minister Ike said,'' I'm very elated for winning such a great award...This shows that Ghana music is not dead as people claim...I won this award against heavyweights. It's a massive win for Ghana and I thank God for letting me become the first Ghanaian to win this award".

The “Onyame Gya” hitmaker won his first honorary award as a gospel music personality for 2016 at the 3G Awards on the 5th of November in New York.

He won his second honorary award for 2016 on 28th November as the Best Gospel Artiste of the year at the Pan African Awards in Ohio.

Minister Ike, is out with his debut single track for 2022 dubbed ‘Only God’. The powerful song is currently enjoying massive airplay on various radio stations.

After bagging several international awards with his “Me Nyame'' and “Onyame Gya” hit songs, Minister Ike has so far won three awards with the newest single track 'Only God' this year.

Watch how he received the award below: