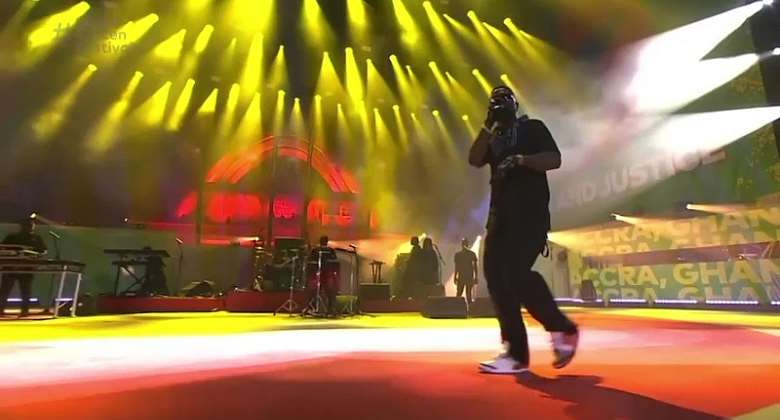 Sarkodie once again reminded music lovers of why he merits the title ‘King Sark’.

King Sark started his performance at the Global Citizen Festival with some danceable tunes before switching to his popular rap songs.

After thrilling the crowd with back-to-back hits, Obidi paused for a moment and introduced the song which he terms the ‘anthem for SarkNation’.

As soon as the beat for the original track dropped, the Black Star Square which was filled to the rafters bounced in excitement as the crowd moved and did the ‘SarkNation’ dance.

The audience watching from home could not have enough of Sarkodie’s performance as they hailed him on social media.

Sarkodie has been up in the trends on social media as Ghanaians and Africans who followed the event showered praises on him for establishing himself as the ‘King’ of music in the country.

Watch his performance below

Latest Photo Reports
Catch up with all the political quotes from our politicians.
Advertise here
More from Exclusive News
ModernGhana Links
My honest answer was twisted by Ghana media - Nasty C clarifies his 2018 controversy about Shatta Wale
I care about my kids so I'll start doing positive music to inspire them — Wizkid
Whether you like it or not, I'm one of the best songwriters in Ghana’s history — Kweku Darlington brags
TOP STORIES