Artists of the Decade from Northern Ghana; Wiyaala, Fancy Gadam and Don Sigli featured in the Top 10 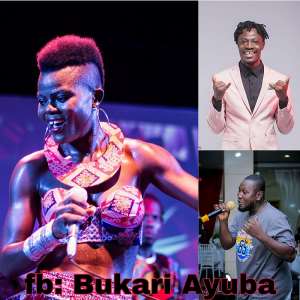 The Northern showbiz industry had its heyday, arguably in the last decade, despite its strong presence at the turn of the new millennium.

Between 2010 and 2020, the industry has spawned some of the biggest singers and rappers in the country, who compete fiercely with experienced and established musicians in the Country and the sub region at large.

Therefore, it is difficult to name the 10 most frequent artists of the period, as dozens of artists have had considerable achievements in the industry.

However, after considering the impact the artists have had in their catchment field, their impact on the national scene, and any awards or notable achievements they have achieved during this period.

These are the top 10 artists from Northern Ghana who especially reigned from 2008 to 2018 and counting.

Ras iconic versatility and theatrical skills have earned him a lot of love among Waala music lovers and he has also remained steadfast over the years.

His 2017 hit album Nuore Yiene was widely broadcast and featured in many music stores around the world including Deezer and Apple Music.

Badingu has performed with musicians from all over the country, including legendary Dagbanli musician Abu Sadiq.

Zamaani Da Gonga formerly known as Lil K is a Dagbanli singer in Tamale. He started rapping in the mid-2000s and produced a number of controversial and beef songs that brought him into the musical spotlight.

However, he turned to singing and quickly became one of the most recognized singers in the Northern region. His rendition of P-Square's performance of "No One Like You" with compatriot Dong Sigli (ca 2009) was the turning point in his career, especially after he broke up with Don Sigli after the hit released. Therefore, he managed to create a support base for himself.

Although he left the scene a few years later, he made a strong comeback around 2016, delivering one hit after another.

Songs like Mumuna, Ti bi lan windira, Nye Nyongu, Nyo Mugli and the 2019 hit Suhupielli celebrating Yaa Naa Abukari II's embrace are some of the biggest hits of his career.

Sherifatu Gunu is a singer, performer and by far the most stable female artist in Northern Ghana, with a career spanning two decades and over the years she has created hit after hit. Songs like Yumtaba, Naa Gbewaa Zuliya, Lahre, Salamatu and Sherifa which featured Sarkodie have become everlasting in the music industry.

The VGMA winner to this day continues to be a shining example of artists of Northern origin, which made him famous throughout the country.

Don Sigli is a singer of Tamale origin and the brother of legendary Ghanaian reggae musician, Sheriff Ghale. Don broke into the music scene with his classic "Pagba," a rendition of "No One Like You" by P-Square and featuring Lil K on it.

Controversy after the song's release also catapulted his career to an incredible height. He has a unique voice and over the past decade he has churned out hit after hit, including the 2016 hit "Wumpini" which saw him perform it in front of President John Dramani Mahama at that time.

His career took a little dip when he briefly left the stage to focus on his studies, however, despite this, he still produced some great songs during this period, which certainly makes him one of the most frequented.

Without a doubt, Soorebia is the best rap musician of the Upper East, having burst onto the music scene in 2017-2018.

It may not have been long him, however, it has been considered the torch of Frafra Rap music and it has lived up to that expectation.

In 2018, Soorebia released Guyman featuring fellow rappers, Maccasio and 2strings, which made waves in Northern Ghana and most parts of the country.

Mama Rams of Blessed Memory is a high life artist and performer who lives in Tamale but is of Mamprugu descend. Her career spanned a period of two decades before her untimely death in 2020.

Multiple Northern Music Award winner who created hits and classics in her rather short life and is considered Mamprugu Celine Dion. Lambelabela, Man maliya and Wumpini are some of his songs that have made waves in Northern Ghana and beyond.

Maccasio is a Tamale-born Dagbanli rapper and performer who entered the industry in 2014. His debut album “Boussu” in March 2014, his second album, “Oshihila Nkpe” in 2015 and his third studio album “Ninsala was” released on August 19, 2017.

However, it was the 2016 single "69 Fans" that boosted his career. Especially after he and Fancy Gadam really fought for control of the music fan base in the region. He made headlines nationally when his 69 peace concert in 2016 saw him draw more than 10,000 people to Tamale Sports Stadium (Now Aliu Mahama Sport Stadium).

He has collaborated with some of the biggest names in the Ghanaian music industry including Shatta Wale, Mugeez of R2bees and Kofi Kinaata.

In 2018, he won Breakthrough Act of the Year at the 3Music Awards and went on to receive nominations at the 2019 edition of the prestigious VGMAs.

The legendary Abu Sadiq is a Reggae artist based in Tamale. His career spanned more than two decades and he managed to stay active in the Northern music industry during that time to present day.

From his debut album Naanigoo to his 2020 single Devil Angel, Abu Sadiq, also known as Policeman, has produced timeless and classic reggae songs that speak to the evils of society.

Naanigoo, Bang Sua, Pam with whom he featured rapper Ataaka in one of his most recent collaborations and "Jelaa", his latest hit single is an example of a combination between his old and new songs become hits.

Said to be the most marketable music brand in the North region, over the years, fantasy gadam has managed to stay relevant by churning out hit after hit.

He burst onto the music scene in the late 2000s and remained relevant throughout his career. Fancy gadam has several albums in her credit and her breakout album contains songs that have made their way into the country music scene.

His collaboration with Sarkodie titled "Total cheat" won the Most Popular Song at the 2018 VGMAs and that was after winning New Artist of the Year at the 2017 VGMAs.

Fancy Gadam has collaborated with artists including Mr. Eazi and Patoranking from Nigeria.

Wiyaala is an Afro-pop singer and arguably Northern Ghana's biggest music export. She made a big splash in the Ghanaian music industry since 2013.

After making a name for herself on reality shows in Accra, she won two awards at the All Africa Music Awards 2014, inaugural edition, Most Promising Artist in Africa and Revelation of the African Continent.

She led the 15th London African Music Festival in London and was recently named one of the 30 Most Influential Women in Music by the 3Music Awards Women`s Brunch.

Wiyaala has been consistent over the years and has earned the admiration and respect of music lovers for her ability to maintain the standard she has carved out for herself since her breakthrough in 2013.

This editorial was originally published on sanatu zambang studios website and rewritten by Bukari Ayuba of Zolaonline.net

We expect President to respect the roadmap on Ofori-Atta's d...
53 minutes ago