Should we let media from other continents cover our story? — Kwao Lezzes is questioned about the GRAMMY "Afrobeat" saga 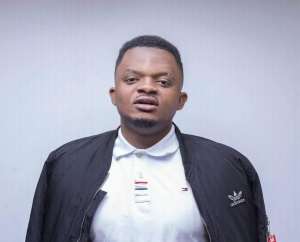 In response to the Grammy announcement that Afrobeat is a fusion of Black American and West African rhythms, Amerado's road manager Kwao Lezzes has joined the chorus of dissenters.

Longtime musician manager Kwao Lezzes was taken aback by how drastically the story of West African culture is being told from what is generally accepted. He questioned whether the mistake resulted from non-Africans telling the African tale rather than Africans themselves.

“Share your thoughts. The #Grammys is claiming #Afrobeats as a Black American Music. Should we allow the Non-African media to tell the Afrobeat story??”

Grammy posted a piece on Twitter with the intention of celebrating the musical genre. Sadly, the tweet's caption sparked questions because the Recording Academy has linked the genre to Black American history.

The original tweet from the Recording Academy has been edited to exclude the ‘Black-American’ mention after several calls' outs on Twitter.

A discussion regarding Africans actively contributing to the archiving of their culture has begun as a result of the many Africans and music specialists who attempted to remedy the blunder. 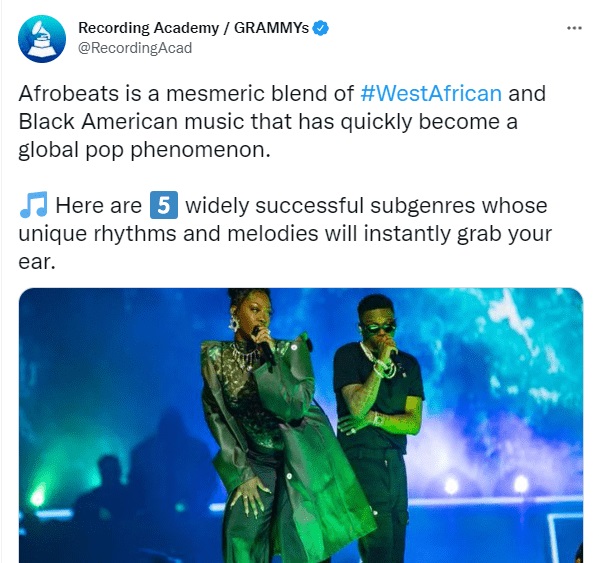 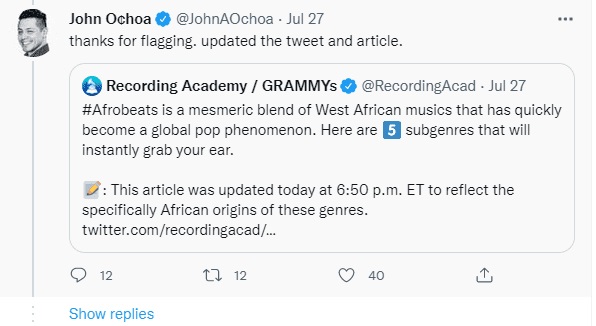 Latest Photo Reports
Catch up with all the political quotes from our politicians.
Advertise here
More from Exclusive News
ModernGhana Links
God loves a prostitute more than a church-going lady — Prophet Ajagurajah
The spiritual attack on my life has strengthened me — Yaw Tog
‘I was once a ‘bofrot’ seller’ - Sista Afia recounts journey to fame
TOP STORIES