I’ll beat Deportee like my child; he should bring my 30k, car and land — Shatta Wale 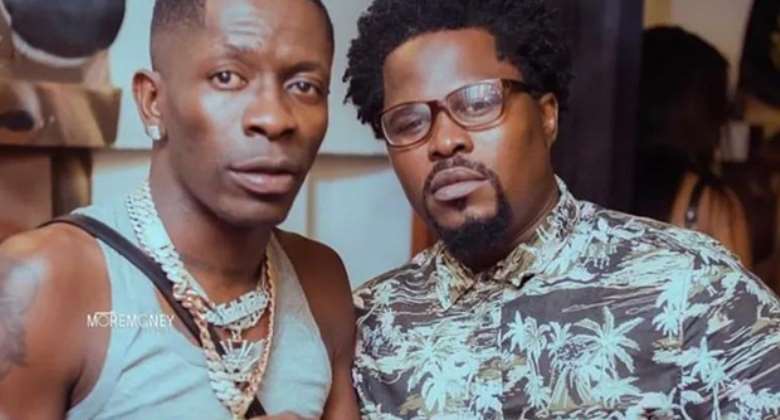 Dancehall act, Shatta Wale is back in his element saying he will beat his friend and artiste manager, Idris Yusif, better known as Deportee like his own child.

This is contained in a response to an allegation that he abandoned Deportee and two other accomplices in his fake gunshot case.

Deportee, a few days ago had come out to drop a bombshell that after they were arrested with the musician over his fake gunshot incident, he got himself bail and left them behind.

He alleged that Shatta Wale only settled his bail, leaving him to his fate.

“You know we went to prison together. He got himself bailed, but without us…these are the things, I don’t want to speak. Maybe with time, we will speak. I know it is a bombshell and it will go out there and it is going to escalate a whole lot of things,” he said in an interview on ‘Time With The Stars’ with Larry Bozzlz.

But Shatta in a reaction said Deportee should shut up else he would not only beat him up but will get him arrested for attempting to rape his (Shatta) secretary.

“When we went to Kumasi, you went to force my Secretary in the bathroom because you wanted to rape her. She wanted to report you to the Police. If you fool I will let her go and you will go back to jail,” he threatened Deportee.

“Deportee, do I owe you money? Is your money with me? You can't afford to pay this small amount of money for your bail but you are out there writing nonsense. You better stop what you are doing, coward!” Shatta fumed.

“If I give you money you don't tell people that I do this or that. See let me tell you, bring my GHC30,000, the car and the land otherwise you won't have it easy. Someone will think that I am mad. ..if you say you are a gangster don't call the police…I am in town. Come meet me in town and be fooling like that I will beat you like you are my child,” he added.

In 2021 an Accra Circuit court remanded Shatta, Deportee and two others into prison custody and later granted bail to the tune of GH¢100,000 each for the publication of false information that claimed Shatta had been shot.

It is that incident that is today bringing issues between them.