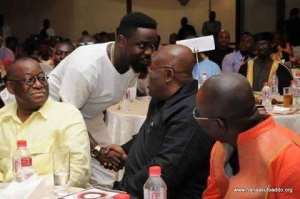 Ace Ghanaian rapper Michael Owusu Addo, better known as Sarkodie has taken to the studio to criticize the Akufo-Addo administration after numerous reactions to his silence on the current happenings regarding the country's economy.

Sarkodie, who has always been known for criticizing governments for mismanagement, including his popular inflation song, has finally felt the heat and decided to slam the government in a segment of his leaked soon-to-be-released song.

Sarkodie is heard preaching against political vigilantism, economic hardship, the arrogance of parliamentarians, and the monopolization of everything by government officials in the aforementioned song.

He then questioned what had contributed to Ghana's economic situation, emphasizing that he would not blame anyone.

“Ghanaians, what contributed to our economic backwardness, I won't blame anybody but if you have joined a political party that makes you engage in violence, advice yourself.

“They have politicized everything and the MPs are now the big bosses,” his words expressed in a disappointed tone.

Sarkodie's Happy Day song, in which he featured Kuami Eugene, drew widespread condemnation from Ghanaians for endorsing Nana Addo in the run-up to the 2020 election.

But his latest posture follows government's decision to seek an economic bailout from the International Monetary Fund (IMF), with discussions between the government and the fund already underway in the country.

Find the song below;