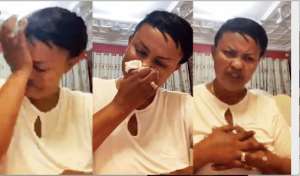 News reaching us indicates that Nana Ama Mcbrown is going through some difficulties.

For this reason, the staff and management of UTV and Despite Media Group where she hosts the popular United Showbiz programme stormed her residence to pray for her.

In the video shared on social media, Fadda Dickson and some UTV crew members were seen praying for the actress and TV host to get better soon.

Nana Ama Mcbrown has been absent from hosting her programme 'United Showbiz' for weeks now prompting management of the top private TV station to hire different celebs on national routines to host the programme.

The last person to host the programme was Vicky Zugah.

Rumours of being sacked from her position as the host of United Showbiz were put to bed recently by Nana Ama Mcbrown in a self-recorded video which was later uploaded online.

In the meantime, it seems Nana Ama Mcbrown is going through some form of battle that requires spiritual warfare which saw some of the workers and management going to her residence to pray for her.

Latest Photo Reports
Catch up with all the political quotes from our politicians.
Advertise here
More from Exclusive News
ModernGhana Links
'I don’t date broke niggas anymore, they ain’t loyal' — Efia Odo
I wrote the ‘fed up’ song on my 10:30 album from my past relationship experience — MzVee
[VIDEO] I've money so I won't get married, I'll just buy a man and use him like a puppy — Popular Nigerian Actress
TOP STORIES