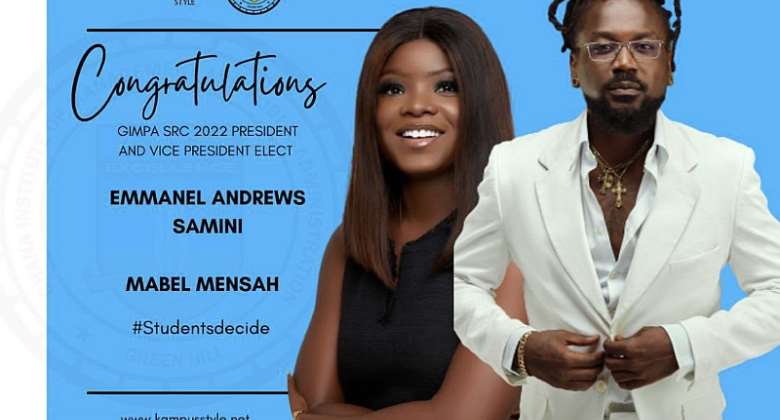 Emmanuel Andrews Saminni, a reggae-dancehall musician, has written a new chapter in his life after winning the Students' Representative Council (SRC) presidential race of the Ghana Institute of Management and Public Administration (GIMPA).

The musician few weeks ago announced his intention to run for the SRC position at the GIMPA.

This comes a year after Samini returned to school, which he announced in a tweet, encouraging anyone who wants to return to school and earn a degree to do so because it's never too late.

“This post is to inspire whoever wants to go back to school that it’s NEVER too late to start from wherever you left off,” he wrote.

Samini promised in his campaign to use the influence he has amassed in his musical career to secure developmental initiatives for the institution, as well as other promises he made concerning the welfare of the student body.

He faced stiff opposition from his contenders, especially one Fred Amese who even wanted to place an injunction on the election based on alleged election rigging in the musician's favour.

Following these allegations, Samini reacted by saying he has a reputation that does not condone election rigging.

“I have an over 20-year legacy to protect and I won’t use GIMPA SRC office to soil it, that’s going to be unfortunate,” he stated.

At the end of the election, which was organized on Wednesday, June 22, 2022, Samini pulled 307 votes to beat his opponent, Theophilus Quartey, who amassed 212 votes. This makes Samini the official GIMPA-SRC president-elect.

Latest Photo Reports
Catch up with all the political quotes from our politicians.
Advertise here
More from General News
ModernGhana Links
Some artistes feel exploited by award schemes—Mr Logic
The history of allegations against R&B singer R. Kelly
I want to be an MP after my singing career, I must advocate for the disadvantaged — KK Fosu
TOP STORIES