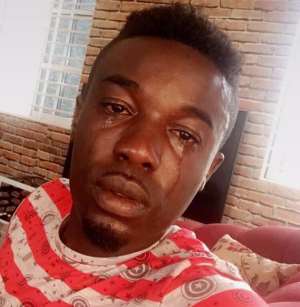 Ghanaian hip-hop recording artist Kweku Addai known in showbiz as Criss Waddle has lamented that he has a problem with his senior brother Kwesi Pee for refusing to defend him on “Sakawa” and fraud tag against him.

Speaking in an interview with Oheemaa Woyeje on Angel FM, monitored by Attractive Mustapha Criss Waddle revealed that he used to have a good relationship with Kwesi Pee and also discuss his personal business ideas with him.

He however mentioned that their relationship became sour after Kwesi Pee granted an interview and stated that he does not really know Criss Waddle’s source of income when he was asked by the interviewer.

''We are okay but not having the best relationship, everything was fine until his recent interview where he said he doesn't know the business I’m into, so when you get a platform and you refuse to defend me I wonder if you are a brother or a friend”.

The AMG boss explained that he has been a businessman since 2016 when he thought of adding seriousness to other businesses aside music.

He added that the street is the stepping stone to the next level so whatever anyone makes at the street one should learn to invest in other businesses for the future.

''Drug was never part of what I was doing on the street and after making good money on the street I decided to invest in real estate and importation so that’s what I do.

''I watch people make mistakes and learn from them and on social media, I learn from those who have achieved from real estate and importations and also have age-mates who have ideas but don't have money so I listened to them alot," he stated.

Hottest Photo Reports
Catch up with all the political quotes from our politicians.
Advertise here
More from Industry News
ModernGhana Links
'Do the needful' — Stella Seal blasts Obaapa Christy for putting her name on her upcoming show without her permission
I didn't expect him to join the “fools” — Tinny fires Stonebwoy for paying his debt without his consent
Afrochella suspends Deezy after sexual harassment allegations
TOP STORIES