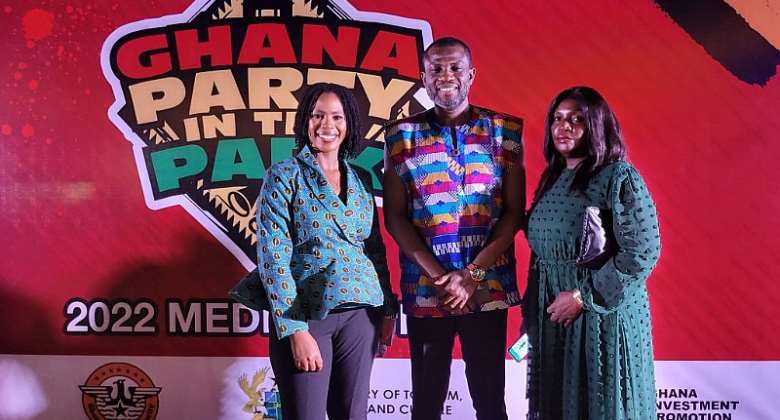 The 18th edition of Ghana Party in the Park was officially launched by the Akwaaba Group on 7th June at the British High Commissioner Residence in Accra.

This year’s event is scheduled for Saturday 16th July in London.

The CEO of Akwaaba Group, Dennis Tawiah said they anticipate a successful event especially with the support they’ve received from both the private and public sector this year. Partners for the upcoming festival include Ghana’s Ministry of Tourism, Arts and Culture, Ghana Investment Promotion Centre (GIPC), Ghana Tourism Authority (GTA), EXIM Bank, Ghana Export Promotion Authority (GEPA), and KGL Foundation, among others.

Deputy Minister of Tourism, Arts, and Culture, Mark Okraku-Mantey commented on the impact Tawiah has made in the entertainment industry when it comes to selling Ghana to the world for over two decades. His contribution to putting Ghana on the map has been recognized by many over the years and his work has also contributed to encouraging people to travel to Ghana every year.

Ghana Party in the Park is celebrated as one of the biggest annual outdoor festivals for the Ghanaian community in the diaspora.

The event is organised by the Akwaaba Group UK and this year has received great support. It’s expected to attract at least 10,000 attendees to celebrate Ghana through culture, food, fashion and music.

“The Ghana Party in the Park event is an important social fixture for the Ghanaian community in the UK, also mainland Europe and globally,” said the Deputy CEO of GIPC Yaw Amoateng Afriyie, who said he has participated in the event on many occasions. “It showcases the best of Ghanaian culture, arts, and food.” He noted that it’s become such an important event that has enjoyed many years of successful engagement and the bringing together of the Ghanaian community.

In past years major artists have performed at the event including Sarkodie, Fuse ODG, Mr. Eazi, Stonebwoy and more. This year’s lineup is yet to be announced.

After the main launch on the 7th of June 2022, the Chief Executive Officer Dennis Tawiah had a private media briefing with the media on 10th June at the Tourist Information Center where he outlined some of the programs which will be happening during the event in London.

He also used the opportunity to plead with the media to support the “Party In The Park” event and every Ghanaian event.

In a one-on-one interview with Blogger Attractive Mustapha, the CEO said his team appreciates the support from the Ghanaian media so far but he wishes the media could gives them more positive stories than the negative reportage.